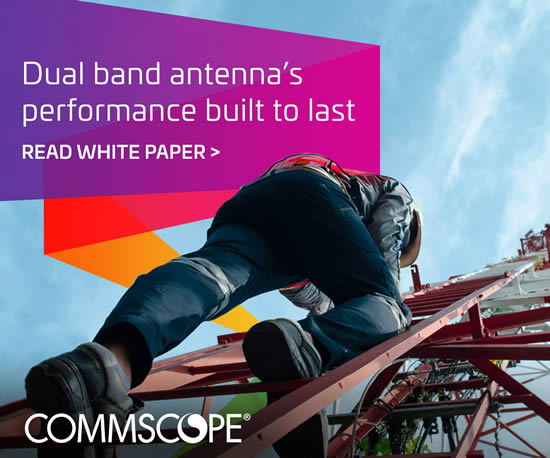 CommScope have just published a free whitepaper explaining in detail the potential use of the E-band in mobile telecoms and the antenna technology required to realise that potential. Read on to get the flavour.

The ‘backhaul’ portion of a mobile network transports data between the radio cell sites and the core network and is a classic operational pain point for mobile network operators (MNOs). The challenge has always been to provide a high capacity, reliable link while trying to keep cost and complexity under control. The methods MNOs use to provide a backhaul link is either via a fixed-line fibre optic cable or wirelessly by line-of-sight microwave dishes attached to the cell towers. Of the two methods, microwave communications is cheaper, quicker to deploy and can have lower latency times than fibre, but due to limited spectrum, microwave backhaul can be limited to sub-1Gbps per cell site. As 5G services are now being brought online the pressure on available capacity in backhaul networks is greater than ever and increasing rapidly.

Potential solutions to this capacity shortfall are for radio equipment manufacturers to begin incorporating higher modulation schemes, MIMO techniques and to utilize higher frequencies where more bandwidth is available. An ideal candidate for this higher frequency spectrum is in the E-band (spectrum in the 70-80 GHz range) which can boost capacity by carrying up to 10Gbps per channel. With a larger channels and lower licensing costs, E-band offers more capacity at a lower cost per megabyte. However, the major problem with using the E-band is physical range, with the high frequency signals only able to travel only a couple of miles before connection reliability falls below 99.999% (the ‘five nines’ which MNOs use as their quality benchmark).

Commscope show in the white paper that the solution to this distance issue is to combine E-band signals with traditional microwave signals in the 6–42 GHz range. This approach will give MNOs the cost and capacity advantages of E-band combined with the increased distance and reliability of traditional microwave. Until now, the efforts to combine E-band and microwave signals have focused primarily on radio network design, with far less attention paid to the actual antennas themselves and their ability to support such a configuration.

A legacy approach to using both microwave and E-band communication links would involve two separate antennas at either end of the link connected by two links, which has obvious additional CapEx costs. CommScope engineers proved in field tests that a new type of dual band antenna which is capable of transmitting and receiving both spectrum bands would have huge advantage in terms of both cost and complexity.

In the tests Commscope used ‘link aggregation’ to maximize both capacity and distance, the dual band antennas making it possible to aggregate data from the two separate links into a single link. The modelled network data shows that aggregating traffic with a dual band antenna has significant improvements: