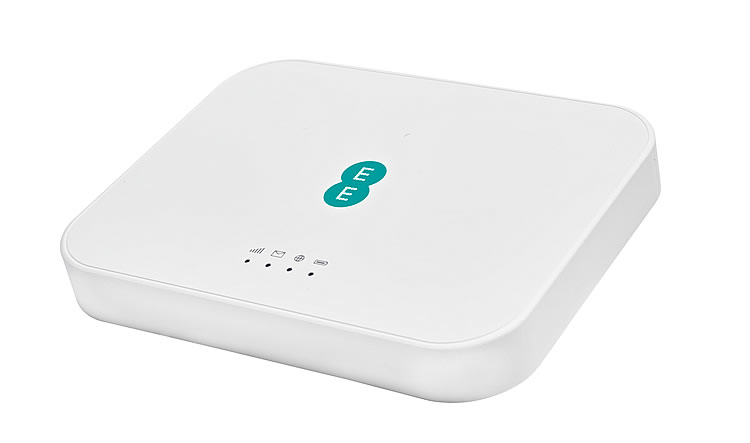 The 5GEE WiFi is a feature-packed 5G mobile broadband device that will get all your gadgets online and then some. It's powerful and speedy, but it's also expensive.

The 5GEE WiFi from EE is a mobile broadband device, meaning that it’s designed to get your gadgets online while you’re on the move. You can use it at home, but you’d be better off with a dedicated 5G home broadband device for that.

For mobile broadband though the 5GEE WiFi has a lot going for it, including the ability to get up to 64 devices online at once, and support for Wi-Fi 6.

In fact, on paper it’s a lot better than most mobile broadband devices – both 5G and 4G ones, but does it hold up in practice? Read on to find out.

Like most mobile broadband devices the 5GEE WiFi isn’t much to look at. It’s basically just a white rectangle with some purple EE branding on the front, a few indicator lights, and a few ports.

This is totally fine though – nobody needs a flashy router, and the EE 5GEE WiFi certainly doesn’t look bad, it’s just very plain.

At 128 x 100 x 17.9mm and 195g it’s also fairly small and light, which is something that’s important for a mobile broadband device. After all, this is something you’re going to want to carry around with you.

It’s a lot smaller and lighter than the HTC 5G Hub, which is one of its main rivals, but then that’s also a far more versatile device and includes a screen – that’s not to say HTC’s option is better though, if all you want is the mobile broadband feature then it’s arguably worse, but we’ll get to that below.

The 5GEE WiFi is – like all mobile broadband devices – very easy to set up. Just make sure it’s charged and has a SIM card in it, switch it on, and it’s basically ready to start broadcasting a network.

It comes with a quick start guide, but quick really is the operative word – this isn’t the sort of tech that you’ll have to spend ages configuring. That’s great, because it means it can just seamlessly fade into the background, getting your gadgets online when needed.

EE hasn’t revealed the maximum download speeds offered by the 5GEE WiFi, but it claims average speeds (on 5G) of 150Mbps, which is broadly in line with the average you can expect on a 5G phone.

That’s also higher than the average you’d get with fibre broadband – though some way short of the maximum of 1Gbps+. Of course it goes without saying that the 5GEE WiFi is also much faster than a 4G mobile broadband device – those are likely to average speeds of under 50Mbps.

Top speeds on the 5GEE WiFi may well be a whole lot faster than 150Mbps too, and as EE’s 5G network improves speeds could as well. Of course, EE’s 5G network is essential to all of this – if you’re only somewhere with 4G coverage, then the extra capabilities here won’t help much, but fortunately EE has 5G in more places than rivals at the time of writing, and is rapidly expanding its coverage.

The most notable feature of the 5GEE WiFi is that it supports up to 64 simultaneous connections at once. That’s a remarkably high number for a mobile broadband device – some 5G rivals top out at 20, and many 4G options top out at just 10.

64 is more the sort of number you’d expect from a home broadband device, not least because most people would be hard pushed to take advantage of that when out and about, unless you want to share your Wi-Fi with everyone in the café or train you’re in. Still, it’s a reassuringly large number.

The EE 5GEE WiFi has some other decent specs too, including a 30-metre Wi-Fi range, so you don’t need to stay glued to it to keep connected, and support for Wi-Fi 6, which the company claims will help improve the 5GEE WiFi’s efficiency in heavy bandwidth situations. So this is the sort of device that should never let you down.

One perhaps disappointing spec is that it only has one ethernet port, so you can only get one wired connection at a time. But for most people that probably won’t be a problem, since most connected gadgets support and are just fine on Wi-Fi.

As for the battery, that’s 6,460mAh, which is a reasonable size but nothing amazing – the Huawei 5G Pocket Hotspot Pro for example has an 8,000mAh one. Still, it should last you for a good long while if you’re only connecting it to one or two devices at a time. Make full use of those 64 simultaneous connections though and we’d expect you’ll probably need to plug in before too long.

There aren’t a huge number of 5G mobile broadband devices just yet at the time of writing, but there are a few that you might be considering.

One is the HTC 5G Hub. This is an oddity because as well as being a 5G mobile broadband device, it also has a 5-inch 720 x 1280 touchscreen and runs Android, so you can also use it as a smart display.

This also means it’s larger and heavier though, at 129 x 100 x 43mm and 340g, all of which makes it feel more suited to a home than on the move, but while you can keep it plugged in, at that point you might just as well have a dedicated 5G home broadband device. In any case, while it will suit some people well, for most it’s unlikely to be the ideal mobile broadband option, especially as it only supports up to 20 simultaneous connections – though it does have a larger 7,660mAh battery.

Then there’s the Huawei 5G Pocket Hotspot Pro, which at the time of writing you can get from O2. This too can get up to 64 devices online at once, and it has a big 8,000mAh battery, plus handy features like superfast 40W charging, and the ability to use it as a battery pack to charge up other devices. It’s a better looking device too, with a 1.45-inch LCD screen.

However, while it’s not overly large at 148 x 72 x 18mm, it’s hefty compared to the 5GEE WiFi at 280g, so if you want something lightweight for carrying around, this isn’t the best choice.

Alternatively, if you pay £275 upfront you can get it on a 1-month contract either with 50GB of data for £50, or with 100GB for £75. While those are some decently high data allowances, the prices are also very high, which could put a lot of potential buyers off.

EE’s network is great for 5G, and there isn’t a lot of 5G mobile broadband competition in general (and no other options sold by EE at the time of writing), so arguably it can get away with these prices.

Note also that while these prices were right at the time of writing, they might well have changed by the time you’re reading this, so it’s worth checking the latest prices if you’re interested in the 5GEE WiFi.

The 5GEE WiFi is an excellent mobile broadband option. It provides fibre-rivalling 5G speeds to all of your devices, anywhere with an EE 5G signal, plus it supports loads of simultaneous connections, and it’s small and light, so you probably won’t mind carrying it around.

Depending on your needs some alternative devices may be better, and it sure is expensive, but for an excellent 5G mobile broadband device on a network with relatively good 5G coverage and high data allowances, it’s sure to be the ideal option for some.