Find out if Three 5G coverage is available in your area,
or when it is coming to your area

Three launched its 5G mobile service in late February 2020, with 66 locations getting 5G on day one, and 154 towns and cities now having 5G.

This all followed a 5G home broadband launch in parts of London on 19th August 2019, and while Three was later to bring 5G to mobile than the other major networks, it hit the ground running with coverage in more places than most rivals.

Three also plans on building the UK's fastest 5G network based on the fact that it has the largest amount of 5G frequency spectrum of any of the UK's mobile operators.

Three's coverage checker shows 5G, 4G and 3G coverage in all places across the UK, broken down by indoor and outdoor coverage, so you should be able to get a clear picture of Three’s 5G coverage in your area, and it’s worth checking, because coverage isn’t comprehensive even in places that have some 5G.

Which cities have Three 5G now?

Three currently offers 5G coverage in 154 locations, including large parts of London. An overview of coverage in that city can be seen below. 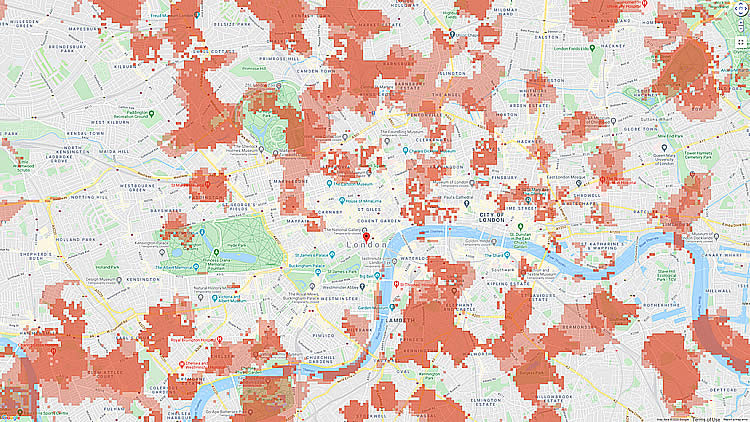 London coverage is far from comprehensive, but you can expect 5G coverage in parts of Clapham, Vauxhall, Ealing, Dalston, Finsbury Park and more. Coverage across London will grow rapidly.

As for the other 153 places, the list of locations is as follows:

At the time of writing, this puts Three ahead of every other UK network in terms of the number of UK locations with 5G coverage.

However, it’s important to understand that 5G coverage is only available in certain parts of each town or city to begin with and will gradually roll out to other areas over time. So it will be important to use Three’s coverage checker even if you know you have coverage in your town or city.

For a visual overview of which places have Three 5G currently, check out the image below. 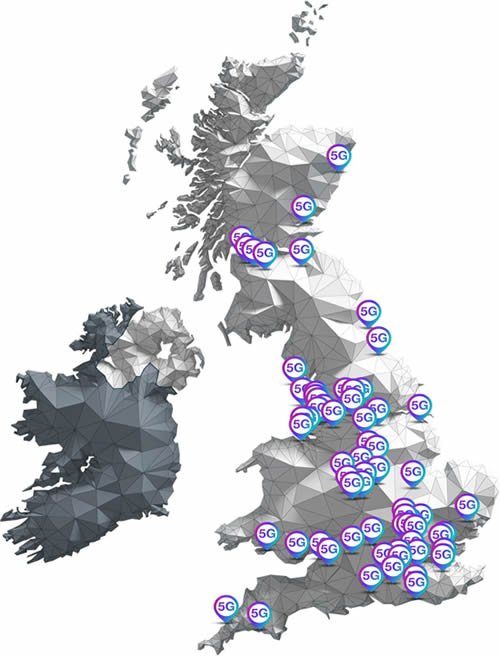 What locations will Three 5G roll out to next?

That didn’t happen, but presumably these places are among the next in line, so we’d expect partial 5G coverage in these locations soon.

How does Three's 5G coverage compare to the other mobile networks?

There are currently 94 major towns and cities with 5G coverage from at least one UK mobile network. EE 5G coverage is currently available in 62 major locations, Vodafone has 30 such locations, O2 has 56, and Three currently has 57.

If you don’t have 5G in your area, then you will need to rely on 4G coverage. The good news with Three is that all its SIM plans are 5G ready at no extra cost, so when 5G does become available in your area you'll be able to access it without needing to pay extra or order a new SIM.

Three has around 99.8% UK population coverage with 4G, along with roughly 98.7% 3G coverage. That’s largely comparable with rivals as you can see in the 4G coverage comparison below.

Most of our data on Three’s 5G speeds comes from an extensive report made by RootMetrics and covering the first half of 2020.

But peak speeds were universally high according to RootMetrics – in London, the network managed a maximum speed of 463Mbps, and the highest speed that RootMetrics recorded anywhere in the UK was 478.1Mbps (a speed which was recorded in Liverpool).

Both of those peak speeds are higher than any rival recorded in these tests, but that’s unsurprising as Three itself has said that it expects to offer peak 5G speeds that are twice as fast as any rival in the coming years.

Given that Vodafone claims users could see peak speeds that exceed 1Gbps, that could mean Three’s network can exceed 2Gbps. According to Three that's made possible due to the network having more ‘5G spectrum’ than its rivals and more importantly being the only mobile network with 100MHz of contiguous spectrum, which is the amount the ITU (the global standards body on 5G technology) state is required for ‘true’ 5G.

That would make for a massive boost on the operator's 4G download speeds, which according to data from Opensignal average 22.4Mbps, while peak real world 4G speeds on the network are unlikely to reach 100Mbps most of the time.

Latency – measured in milliseconds (ms) - is how long the mobile network takes to respond to a request. A high latency can make things feel sluggish to respond even if download speeds are high, but the good news is that with 5G, latency could ultimately be as low as around 1ms. That’s compared to around 30-50ms on 4G, although current 5G networks deliver average latency of between around 21-26ms according to Ookla.

Three’s looks to be better than that in at least some places though, as a RootMetrics report found that in central London its 5G latency was just 17ms – which is far lower than rivals managed in the same tests.

Latency – measured in milliseconds (ms) - is how long the mobile network takes to respond to a request. A high latency can make things feel sluggish to respond even if download speeds are high, but the good news is that with 5G, latency could ultimately be as low as around 1ms. That’s compared to around 30-50ms on 4G, although current 5G networks deliver average latency of between around 21-26ms according to Ookla.

Three's 5G spectrum holding as compared to rivals can be viewed below.

Three has specifically said that it believes all this spectrum makes it the best placed of the four main UK networks for early 5G leadership – a claim that it has since got into more detail about, saying that it’s the only UK network that can offer ‘true’ 5G at launch, as it’s the only one with 100MHz of contiguous spectrum that’s ideal for 5G.

It will likely gain more 5G spectrum over time too, as there will be future 5G auctions for spectrum in the 3.6GHz - 3.8GHz bands as well as the 700MHz band, and likely also the 26GHz and 8GHz bands.

Ofcom is also looking at other potential bands that could be used for 5G.

Networks that have launched 5G in the UK