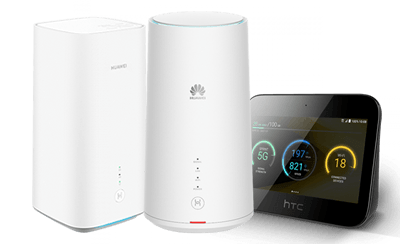 See Deal
Still looking for the perfect deal? Use filters to find the right deal for you.
Filter Deals
Or show more deals

5G broadband offers blazing fast upload and download speeds way faster than 4G and potentially even faster than fibre broadband. It's also great because you don't need a landline and you can use it at home, or even on the move.

What is 5G Broadband?

5G broadband offers superfast download speeds and a true alternative to traditional fibre broadband which requires a landline. Infact, it's seen as a disruptive technology that will take a great number of customers away from traditional broadband.

Designed to provide broadband to a household, or business. Involves a 5G router which needs to be connected to a power outlet and can share internet over a wider range and with a great number of devices (up to 64 devices currently). No landline required.

Designed to provide portable broadband you can use anywhere. Involves a 5G mobile Wi-Fi device which has its own battery that shares internet over a shorter range with a lower number of devices (up to 20 devices currently). No landline required.

Advantages and Disadvantages of 5G Broadband

Exact download speeds for 5G whether in home broadband form or mobile will vary, but in the early days should average around 150-250Mbps, with peak speeds of over 1Gbps. That compares very favourably to 4G broadband and potentially betters other broadband types too.

Latency is also very low, meaning requests are sent to the network near instantaneously. 5G can theoretically have a latency as low as 1ms, while fibre broadband is often around 20ms, and 4G broadband is slower still..

In the case of 5G home broadband, one other advantage (over fibre broadband) is that it can be cheaper than you might expect, as no landline is required. In fact, essentially all you typically need is to plug in a router, which makes setup quick and easy and shouldn’t require an engineer visit. Contracts are also potentielly shorter term, making plans more flexible.

The main potential downside of any form of 5G broadband is simply that 5G coverage is limited at launch to the main cities but that will change soon.

Many plans also have data limits, which is true on 4G broadband as well, but not something you tend to get on wired home broadband. However, you can get some 5G broadband plans with unlimited data, so even that needn't be an issue.

EE offers plans and devices for both 5G broadband.

For mobile broadband on EE there's the HTC 5G Hub, which is a battery powered device that can get up to 20 devices connected to 5G at once, wherever you are (as long as there's a 5G signal) over a range of 30 metres. It has a 7,660mAh battery but unlike most mobile broadband devices it also has a touchscreen, specifically a 5-inch 720 x 1280 one. Coupled with a high-end Snapdragon 855 chipset, 4GB of RAM, 32GB of storage, a microSD card slot, speakers, and Android 9 Pie, this is a full-blown Android device in its own right, so you can use apps and media on the screen as well as controlling the connections to other devices.

For 5G home broadband, EE sell the 5GEE Home Router. This can get up to 64 devices online at once over a range of 100 metres, so it should be fine for even the largest and most high-tech homes. It's wired, rather than battery powered, but is basically plug and play, so easy to set up. Exact details and pricing haven’t been announced yet, but EE says that speeds will be faster than superfast fibre and consistently reliable.

Before opting for any of EE’s 5G services though you should use EE’s coverage checker to see if you have 5G in your area – at the time of writing it’s limited to parts of London, Cardiff, Belfast, Edinburgh, Birmingham and Manchester. However, it’s set to land in at least ten more cities during 2019.

Vodafone currently only offers 5G home broadband, so there are not yet any 5G mobile broadband plans available on the network, but with unlimited data plans it's in a strong position.

The GigaCube is what you'll be using for 5G home broadband on Vodafone. This can get up to 64 devices connected at once, and it's plug and play with no need for a landline or an engineer visit. It's also lightweight and portable, so you can take it with you and plug it in somewhere else if you want.

You can initially get Vodafone 5G broadband in parts of Birmingham, Bristol, Cardiff, Glasgow, Manchester, Liverpool and London on day one, with at least 12 more locations set to get it by the end of 2019. For full, up to date coverage, head to Vodafone’s coverage checker.

Three has launched a 5G service in London, but at the time of writing it only offers 5G home broadband there.

Three also only offers partial coverage even within London, but that’s in line with other networks.

Three uses the Three 5G Hub to provide your home internet connection. It can support up to 64 simultaneous connections, and like rival devices it’s plug and play, lightweight, and doesn’t require a landline. Plus, plans come with unlimited data, making it a strong rival to Vodafone.

While coverage is currently limited to parts of London, we know that it will rapidly expand to 24 more towns and cities and that at some point (probably soon) it will also offer 5G mobile broadband via the HTC 5G Hub.

That's the same device as EE uses for 5G mobile broadband, so it has all the same features, including a 30-metre range and the ability to get up to 20 devices connected at once. It's also a full Android device in itself, with a 5-inch 720 x 1280 screen, Android 9 Pie, a 7,660mAh battery, speakers, a Snapdragon 855 chipset, 4GB of RAM, 32GB of storage and a microSD card slot.

O2 hasn’t yet revealed whether or not it will offer 5G broadband, but we know that its 5G mobile service will be launching sometime this summer in Belfast, Cardiff, Edinburgh and London, so we’d expect to find out more soon. If it does offer 5G broadband, you’ll want to check whether you have O2 5G coverage before signing up for it.

No other networks have yet announced 5G broadband plans, but some may well offer it. BT Mobile, Voxi and Sky Mobile has all announced plans to launch a 5G mobile service this year, so they're the first ones to look out for.

How does 5G home broadband work?

5G home broadband is a wireless way to get home internet. By wireless, we mean it doesn’t rely on a fixed line (e.g. a fibre optic cable or a phone line) coming into your house. Instead, signals are carried wirelessly from a nearby mobile mast.

As with other forms of home broadband, those signals will be received by a router in your home, which then sends them on to other devices. Your devices don’t need to support 5G to use 5G home broadband, as the signal is received as a Wi-Fi network.

It’s basically just like 4G home broadband, except much faster.

How does 5G mobile broadband work?

The difference is that 5G mobile broadband routers are battery-powered rather than wired. That makes them more portable, but they also tend to work over a shorter range and are typically not capable of getting as many devices online at once.

How does 5G broadband compare speed-wise to alternatives?

5G broadband can theoretically far exceed 1Gbps speeds, with average speeds typically between 150-250Mbps. The fastest alternative is fibre broadband, which theoretically tops out at around 1Gbps, but at the time of writing the fastest fibre broadband package in the UK only offers average download speeds of 362Mbps - and those speeds aren't available everywhere. Indeed, many homes and businesses don't even use fibre, instead opting for a cable or ADSL connection, and these are far slower.

4G meanwhile theoretically tops out at around 300Mbps, but you're unlikely to get more than 100Mbps in the real world, and average speeds are between around 15-30Mbps, depending on network.