By Jon Mundy and James Rogerson

Thanks to 5G, an exciting new alternative to traditional fibre home broadband is starting to emerge.

The next-generation mobile network known as 5G is not merely a super-fast way to get connected from your smartphone, it’s also being positioned as a viable means of connecting to the internet from your home.

In order to connect to 5G home broadband, you’ll need a 5G router. Here’s a rundown of the current 5G router market in the UK.

What is a 5G router?

A 5G router is a plug-in device that enables you to access home broadband using a 5G signal rather than the telephone wiring that runs to your home.

With average real world download speeds of between around 100–200Mbps, 5G home broadband is already faster than standard fibre broadband where available. With peak speeds potentially exceeding 1Gbps in places, it could even potentially compete with top-notch full fibre broadband.

5G also benefits from lower latency than 4G, which should in time make for a fixed broadband-like responsive online experience. Based on the available data, you can currently expect a ping of around 20-35ms, which falls in between a decent home broadband connection (10–20ms) and a 4G broadband connection (around 35-50ms).

But perhaps the key benefit of using a 5G router right now is how quick and easy they are to set up. You can receive it in the post the very next day after you order, at which point you literally plug it in and access the internet. There’s no need to wait around for an engineer to visit.

Given the relatively new nature of 5G broadband, there aren’t an awful lot of options for 5G routers on the market. In fact, until fairly recently there was only really one, albeit rebranded by three different networks. Thankfully, the choice is a little wider now. 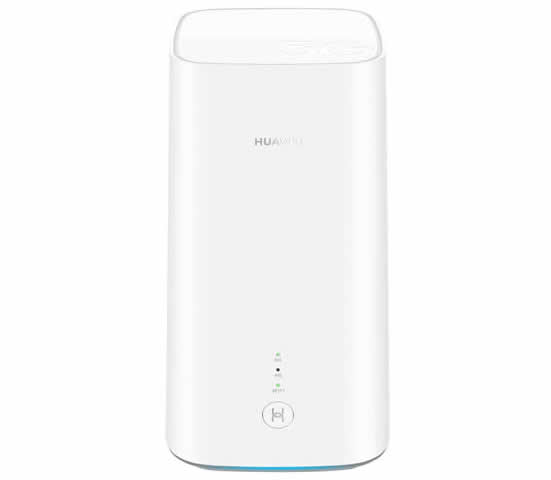 The Huawei 5G CPE Pro (above) was notable for being the 5G router that every UK 5G broadband supplier issued – but Vodafone and EE have now replaced this with alternative models. You can still get it from Three, which calls it the Three 5G Hub, and National Broadband, which calls it the 5G WiFi Router.

The Huawei 5G CPE Pro router allows up to 64 devices to get online at once, and also has two Gigabit Ethernet ports, which are handy for console and PC gaming, plus support for external antennas, to boost your signal if needed. It also offers support for download speeds of up to 2,330Mbps, which clearly isn’t attainable right now. But 5G is only predicted to get faster over time, and the Huawei 5G CPE Pro will be ready for it when it does. 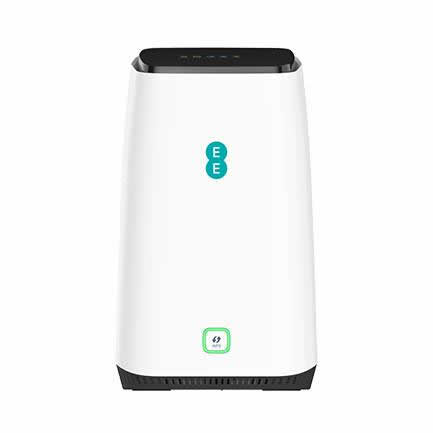 EE used to offer the Huawei 5G CPE Pro, just like Three, but under the name of the 5GEE Home Router. It has now replaced that device with its own-branded 5G router (seen above), the 5GEE Router 2021.

We say 'own-branded', but it appears to all intents and purposes to be a rebranded Zyxel NR5103 router, which can theoretically get up to speeds of 4.67Gbps. That's much higher than the 2.33Gbps of its predecessor and some rivals. Not that you'll be experiencing anything like those sorts of speeds for the foreseeable future.

EE claims that you'll get average speeds of 150Mbps from its 5GEE Router, and that it's powered by a chip that switches between 4G and 5G depending on signal strength. Like rivals it can get up to 64 devices online at once. 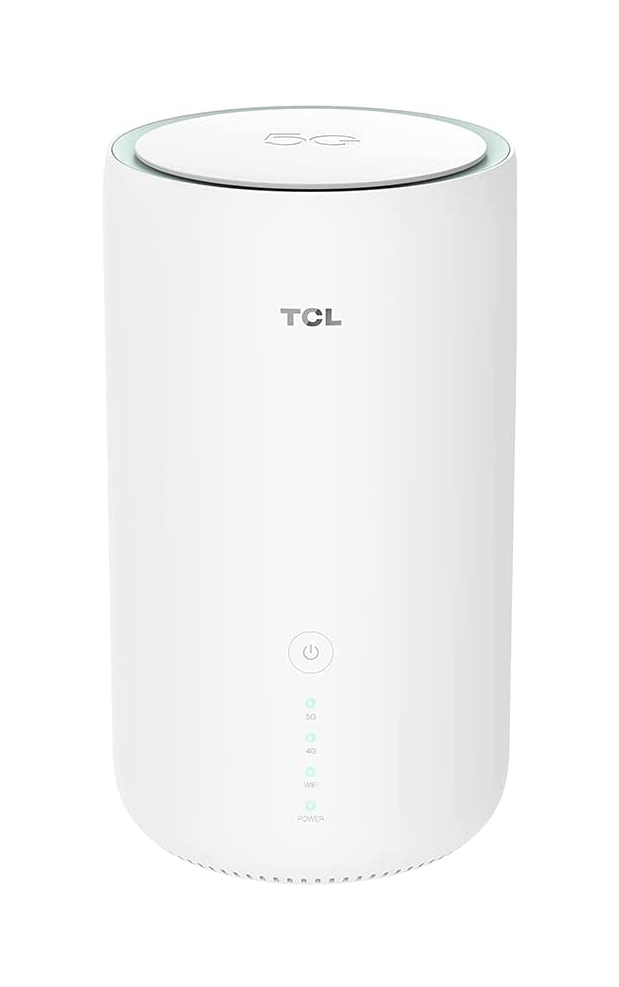 The Vodafone GigaCube 5G is a rebranded TCL 5G CPE router, which theoretically offers top speeds of 2.8Gbps, though Vodafone only advertises speeds of up to 1Gbps.

Like rivals, it can get up to 64 devices online at once, so it’s competitive with rivals. Note however that Vodafone used to offer a different router under the same name – namely a rebranded Huawei 5G CPE Pro, which is still used by Three and National Broadband.

Your choice of alternative 5G routers is extremely limited at the time of writing. But there are a few interesting options if you want to be more flexible or mobile with your 5G broadband connectivity.

The 5GEE WiFi is the latest mobile broadband device to be launched by EE.

EE's device has a lot going for it, with a massive 6,460mAh battery, a 30-metre Wi-Fi range and the ability to connect up to 64 devices at the same time. Impressively, it also supports Wi-Fi 6, which is the very latest generation of Wi-Fi, leading to improved efficiency and speeds when multiple devices are connected.

Theoretical maximum speeds of up to 2.33Gbps are supported, but currently you can expect average speeds of around 150Mbps. This doesn’t support external antennas, but that’s typical with portable devices. 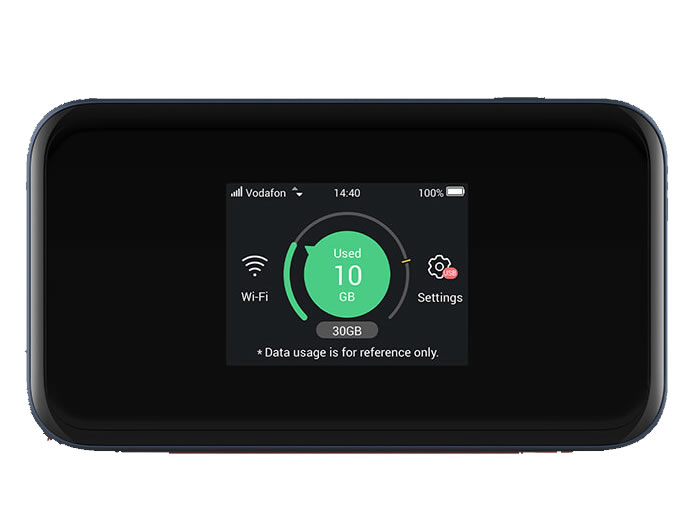 The Vodafone 5G Mobile Hotspot (a rebranded ZTE MU5001 5G) is Vodafone’s first 5G mobile broadband router, but it doesn’t feel like a first-generation device, as it easily stands up to the best rivals.

It includes support for up to 32 simultaneous device connections, eight hours of battery life, and it even has a 2.4-inch 320 x 240 colour touchscreen, which makes interacting with it (and seeing its status) so much simpler than on some portable routers.

There’s also support for Wi-Fi 6, an Ethernet port, and two ports for external antennas. So while it’s not quite as packed full of features as a typical 5G home broadband router, as a mobile option it has more than enough.

If you need maximum mobility from your broadband connection, then the Huawei 5G Pocket Hotspot Pro could be a good choice.

Available through O2, the Huawei 5G Pocket Hotspot Pro is a tiny 280g device powered by an 8,000mAh battery. It offers 5G download speeds of up to 1.65Gbps, though again, you’ll likely be getting around a tenth of that most of the time.

Elsewhere, you get a USB-C port for wired charging (at up to 40W), and that’s your lot for physical connections – though it can also be used to wirelessly charge other devices. On the whole though, this is as no-nonsense a 5G router as they come, with no external antenna ports.

If you’re looking to set up a mobile home broadband service, but don’t live in a 5G area, there is another option. A 4G router will work in much the same way as a 5G router, but with lower download speeds and higher latency.

You can pick up the Three 4G Hub on Three. It’s technically capable of download speeds of up to 600Mbps, though you almost certainly won’t achieve anything like those speeds given the limitations of the modern 4G network.

Any such issues won’t be down to the router itself though, which is one of the most capable on the market. You can connect up to 64 devices simultaneously over Wi-Fi - the same as most 5G routers - and there are also four ethernet ports for wired connections and two sockets for hooking up a signal-boosting external antenna.

If you need something even better, there’s the Three 4G Plus Hub, which has similar core specs but should offer more reliably high speeds.

EE offers the 4GEE Home Router 3, which supports EE’s “fastest 4G speeds”. The network doesn’t get more specific than that, but it’s worth noting that EE typically has the best all-round 4G performance in the UK. There’s support for up to 64 simultaneous connections, and a 30-metre Wi-Fi range. You only get two Ethernet ports, however, so if you’re fond of physical connections over Wi-Fi, it might not be the best choice.

The BT 4G Home Hub is also being offered through EE with one of the BT-owned network's own SIMs. This plug-and-play router is a Cat 7 device with support for up to 300Mbps download speeds and 100Mbps upload speeds. That said, your actual speeds are more likely to fall in the region of 30Mbps, 4G connectivity being what it is.

Unlike the aforementioned EE model, however, you only get support for up to 32 device connections at once. The 4GEE Home Router 3 allows 64. Of course, how likely you are to even attempt to approach either of those figures on a humble 4G router is another matter entirely.

5G broadband is much faster and more responsive than 4G broadband, and that gap is going to increase exponentially over the coming years. You should go with a 5G router if at all possible.

There are only two reasons you should actively choose a 4G router over a 5G router: budget and availability. It’s early days for 5G connectivity in the UK, and it’s neither widely available nor particularly cheap to get set up with a 5G broadband package.

How do I check whether I can get 5G broadband?

Check out the 5G coverage checker for the UK’s  two 5G home broadband suppliers (Three and Vodafone). Keep an eye on EE too, as it used to offer 5G home broadband and might do so again. You might also want to consider a portable/mobile broadband option from EE or O2.

How fast is 5G broadband?

At the time of writing, real world download speeds for 5G broadband tend to fall between 100 and 250Mbps, which is faster than most regular broadband packages. Peak speeds have been recorded of around 1.5Gbps in certain places, however, which rivals the fastest full fibre broadband services available in the UK.

Can I get an external antenna for a 5G router?

Yes, you can. The Three 5G Hub and Vodafone GigaCube 5G both support external antennas, which you can connect to improve your signal, which is ideal if your 5G signal is iffy or absent without an antenna.

Why aren’t there many 5G routers on the market?

5G is still in its infancy, particularly here in the UK. Only two operators are offering 5G home broadband packages, and only in a relatively small percentage of the country.

Because of this, there isn’t an abundance of 5G router options available. This will undoubtedly improve over time as 5G broadband becomes more popular.