England has seen the lion’s share of UK 5G rollout 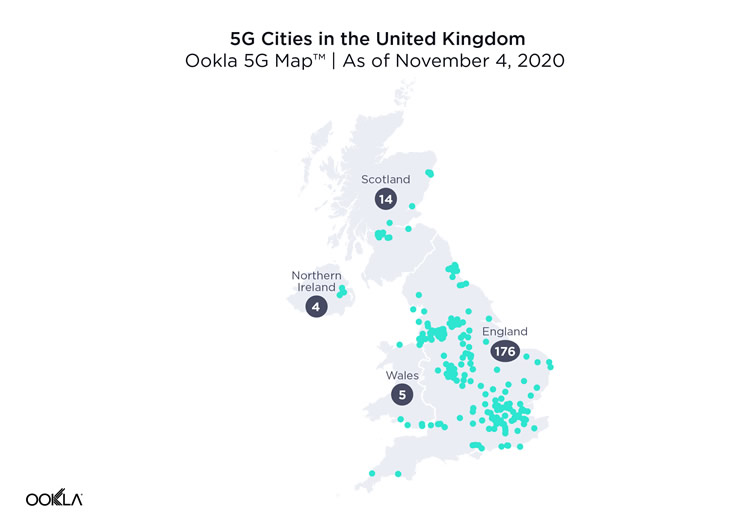 Speedtest Intelligence and Ookla Cell Analytics recently published their 5G access data for Q3 2020, showing some vital insights into the variation of 5G performance across the four major network operators and the four home nations. One finding that really jumped out of the data is that 5G access across the UK is hugely uneven, with England seeing the vast majority of the cell site deployments.

The Ookla 5G Map above shows that there were 5G deployments in 199 towns and cities in the UK as of 4th November 2020. Of those 199, 5G was commercially available in 176 English cities, there were 14 5G cities or towns in Scotland, five in Wales and four in Northern Ireland.

It would be easy interpret this as a London-centric bias on the part of the Mobile Network Operators (MNOs), but in these early days of 5G rollout in the UK we have to consider the MNOs own return on investment (RoI) models. The huge capex spend that the MNOs have pumped into 5G and the ever growing Opex cost, mean that 5G needs to start paying for itself pretty quickly.

As such, the plan is to target low hanging fruit, the areas of highest population density where they can onboard as many consumers and businesses to 5G services as possible. This calculation directly informs the order in which geographical areas are given 5G cell sites, central London being top of the list and remote locations in rural Scotland being the bottom.

Competition is hot for the first wave of 5G subscribers

The MNOs have been quite candid about the exact location of new cells being brought online, but the general rule for the coming year is that the UK’s towns and cities have priority, ultimately a 98% UK geographical coverage is the aim by 2023.

The battle between the MNOs to acquire 5G subscribers is therefore currently based on presence, being the first operator to provide 5G in certain areas. After that the differentiators will be more performance and customer service based.

The Ookla data shows that Three have emerged as the leader in London on mean download speed over 5G, but not by any significant margin, so performance-based competition is hot in these early stages. One interesting KPI that also came out of the data is that 5G was a huge 518% faster than 4G in the UK in Q3 2020, so early network deployments are working extremely well from the start.