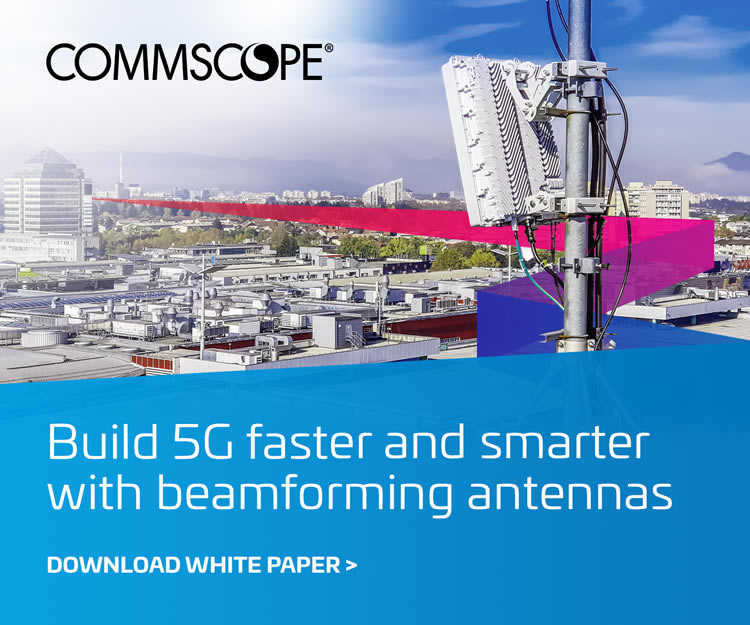 CommScope have produced a free whitepaper to download which explains all about 5G beamforming. Read on to get the flavour.

The 5G era is ushering in a variety of new radio access network technologies to enable mobile network operators (MNOs) to provide the blistering speeds and performance that 5G has promised. Among these technologies is a new type of antenna which allows MNOs to not only offer increased efficiency and performance, but also an individualised quality of service (QoS) to different mobile users, they are called beamforming antennas.

As the name suggests, these antennas differ from traditional mobile transceivers (which radiate radio signals outwards in a sphere or similar fixed pattern) as they are able to form multiple simultaneous beams of signal which enables MNOs to create a much more dynamic and responsive radio strategy for 5G NR in the complex real-world environment of our towns and cities.

Why beamforming? What are the benefits?

Focusing a signal in a specific direction rather than arbitrarily radiating outwards in all directions, enables beamforming antennas to deliver higher signal quality to mobile receiving devices (i.e smartphones), which results in faster information transfer with fewer errors. The traditional way to boost speed and to lower errors was to increase the gain of the antenna, so in this respect beamforming allows increased operational efficiency without cranking the broadcast power.

Another key benefit of beamforming concerns the radio interference patterns that invisibly cover our world, this interference can come from a myriad of sources including buildings, power lines, weather or even MNOs own networks. Beamforming enables a dynamic response to this interference as the antennas can ‘tune’ the beams around these obstacles to provide optimum service.

How does beamforming work?

According to Commscope, beamformers offer various configurations and capabilities; each suited for a certain environment. Physically, these antennas might look very dissimilar, but all beamformers share three main design philosophies which are described in detail in the Beamforming white paper:

In essence beams are created by a technique involving multiple antennas in a close proximity array, all broadcasting the same signal at slightly different times, coordinated by software in the base stations. The overlapping radio waves produce interference patterns which are in part constructive (amplifying the signal) and in parts destructive (weakening or cancelling out the signal).

Using this technique the antenna array is able to shape the interference pattern into a beam and the MNOs can focus multiple beams of different frequency waves simultaneously from the same antenna. This may be done in a passive or active manner, depending on the specific scenario in the field, Commscope detail both of these use cases, within the whitepaper.

Another key technology in 5G NR is Massive MIMO (multiple input, multiple output) antennas, so what happens if we increase the radio transceivers beyond eight using a mMIMO system?

With the massive number of antenna elements, beamforming becomes three dimensional. 3D Beamforming can create both horizontal and vertical beams toward users, increasing data speeds and network capacity for all users - even receivers on the top floors of tall city buildings.