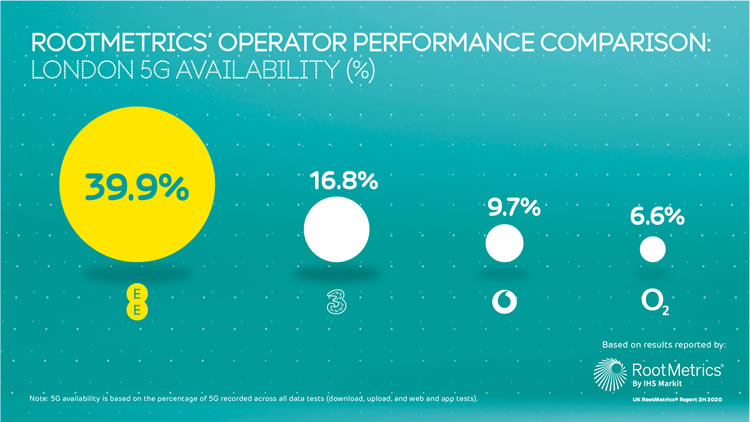 A new independent report has found EE to be London’s best mobile network - and it’s not even close.

Independent telecoms analytics firm RootMetrics has just released its latest UK Mobile Performance review for the second half of 2020, and EE continues to be the dominant operator in the country. It also secured a convincing win when RootMetrics zoomed in to examine network performance within the UK’s capital city.

While EE was found to have the most 5G coverage in the UK as a whole, its win was especially convincing in London, where it managed to reach 39.9% of the city’s population. This represents impressive growth from the first half of 2020, where the figure stood at 28.8%.

One interesting point to note here is that Vodafone scored the fastest 5G median download speeds in London at 216.6 Mbps.

Lest you get the impression that EE is overly focused on the UK’s capital city, it had the highest 5G coverage in 15 of the 16 cities that RootMetrics tested in.

Beyond that, EE came top of the UK-wide chart on overall performance, reliability, speed, data, call, and text. On the one category it didn’t win outright, accessibility, it still came join top with Vodafone.

EE was also found to have by far the fastest aggregate median download speed in the UK at 43Mbps. This was just over double the speed attained by second placed Vodafone.

For its 2H2020 report, RootMetrics conducted 645,000 tests across 16 cities in England, Northern Ireland, Scotland and Wales between July and December 2020. EE came away with a staggering 100 RootScore Awards out of 112 total award chances.