RootMetrics – an independent testing firm for mobile networks – had found EE to be the best network for six years in a row, and now it’s just done so for a seventh, including when it comes to 5G.

In the company’s latest report, which includes extensive testing of the UK’s mobile networks during the first half of 2020, it found that EE came out on top in six of the seven things it tests (reliability, accessibility, speed, data, call, and overall), as well as coming joint first with Vodafone for text performance.

That’s all impressive, but we’re focused on 5G here, and EE was no less impressive on that front. For a start, it was the only network with 5G in all 16 cities tested (namely Belfast, Birmingham, Bristol, Cardiff, Coventry, Edinburgh, Glasgow, Hull, Leeds & Bradford, Leicester, London, Liverpool, Manchester, Newcastle, Nottingham, and Sheffield).

It also had the highest 5G availability in all of those cities – meaning 5G in more parts of them. It was found to have availability of over 21% in 12 cities, which might not sound like much, but we’re still in the early days of 5G, so that’s to be expected. It also got way higher than that in some, with 40.2% availability in Birmingham being its highest.

The network’s 5G was found to be very fast, clocking in with 5G median download speeds of at least 103.9Mbps in all 16 cities. That said, its fastest recorded median was 145.9Mbps in Newcastle, which is slower than the 193.7Mbps recorded by Three in Leicester, or the 181.8Mbps recorded by Vodafone in London. O2’s fastest median meanwhile was just 121.3Mbps in Belfast.

So based on that Three might actually be the fastest 5G network, and it also recorded the highest maximum speed at 478.1Mbps (in Liverpool). That’s likely because it has more 5G spectrum than rivals, so that bodes well for its 5G future, but right now coverage is lacking, with the highest availability it offered in any city being just 15.4%. That dropped as low as 1% in some cities, and 5 cities didn’t have any 5G from the network at all.

As for Vodafone, it achieved excellent and consistent 5G speeds, with a median of at least 112Mbps in 9 cities – though it only offered 5G at all in 10 of those tested, so coverage was limited, but it managed a respectable 16.8% availability in one of those (Bristol).

Finally, O2 delivered the worst 5G performance, with no availability in 12 of the 16 cities, and a maximum availability of just 0.6% (in Belfast). That low availability means that RootMetrics was only able to calculate a median 5G speed in Belfast, so O2’s highest median of 121.3Mbps is also its lowest. Basically, until its 5G coverage improves it will be hard to get an accurate picture of O2’s 5G speeds.

RootMetrics also took a detailed look at 5G in London, reporting that EE has by far the highest 5G availability there, at 28.8%, while Three and Vodafone were both at 5.2%, and O2 was at 0.3%.

The tests also revealed that the median download speed in London was 138.1Mbps for EE, 133.8Mbps for Three, and 181.8Mbps for Vodafone, while there weren’t enough O2 test samples to get a median. 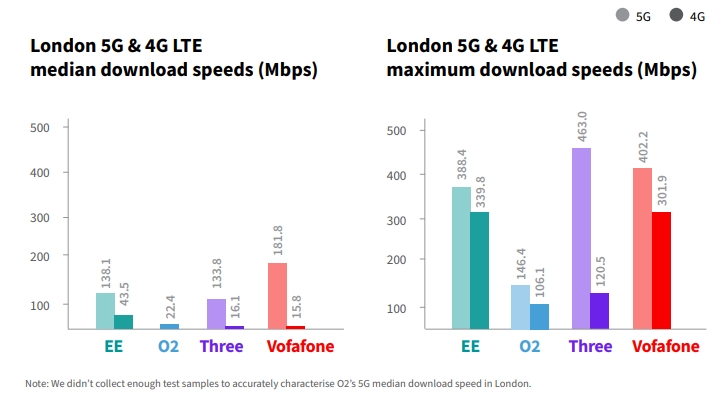 These results also show that the networks massively outperform their 4G networks, as you’d expect, especially for median speeds.

All in all it’s a fairly promising picture, and even for networks with lesser results, such as O2, it’s worth remembering that 5G coverage is improving rapidly, so already O2 might be in a better position.

The highlights though are definitely EE, with its far wider 5G availability than rivals, and Three, with its higher top speeds.