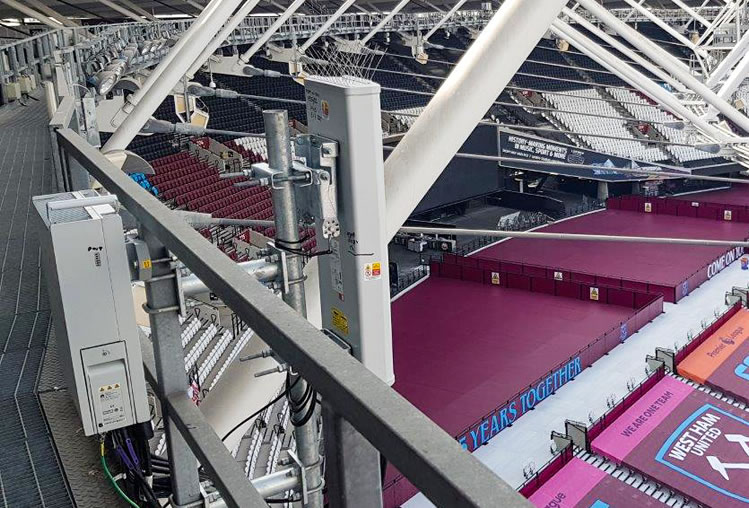 One of the new 5G masts at London Stadium shown above.

EE has just switched on its 5G network at London Stadium in Stratford, meaning that fans will be able to take advantage of massively increased upload and download speeds, as well as improved reliability while attending events.

The increased network capacity on site should also ensure speeds remain high and consistent, even when there are tens of thousands of people all accessing mobile data at once, which is key in a venue that can hold 80,000.

EE promises that along with the recent update to HD Wi-Fi at London Stadium, the roll out of 5G there will mean fans have access to fast and reliable speeds wherever they are in the stadium.

From football fans to music buffs, everyone benefits

That should be good news for all sorts of people, as London Stadium is billed as the country’s most successful multi-use venue, hosting football, rugby, concerts, baseball, and athletics events, among other things.

Graham Gilmore, CEO of London Stadium, said: “We want to give our fans the best possible experience when they visit our stadium, the upgrade to 5G means that whether you’re coming to London Stadium to watch the football, baseball, rugby, athletics or a concert, you will always have the ability to be connected and have the best that technology has to offer.”

The upgrade to 5G will also benefit the safety, security, and general operations of London Stadium, as well as aiding in the venue’s move to cashless transactions, improving the accuracy of location services, and, intriguingly, providing the opportunity to “introduce multiple technologies which can be used simultaneously across the stadium and the immediate surrounds of Queen Elizabeth Olympic Park.”

In all, it sounds like London Stadium should now be one of the best connected stadiums in the UK, and this isn’t the first time EE has given it an upgrade, as the network also enabled 4G there in time for the 2012 Olympic Games, back when it was the Olympic Stadium.