Vodafone has been named the best 5G network in London by a mobile benchmarking company.

Global consultancy and testing company umlaut tested all four of the UK’s major mobile networks between June 15 and 20 of this year to establish which provided the best 5G service in the capital. The test covered 4.5 million people, amounting to more than half the population of London. 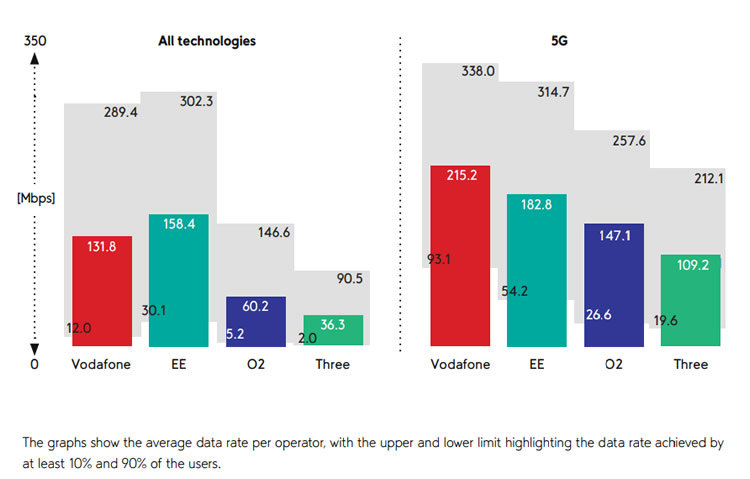 Umlaut benchmarked the typical user experience using the latest 5G-capable smartphones. The findings of this test were that Vodafone produced the fastest 5G network in London, with average download speeds of 215.2 Mbps, as above.

The report also found that Vodafone provided the most reliable 5G service across a number of key online services. For example, Vodafone attained an impressive reliability score of 99.7% when using YouTube on 5G in London, and a perfect 100% reliability score for web browsing (see below). The network also scored highest in umlaut’s file download and upload tests. 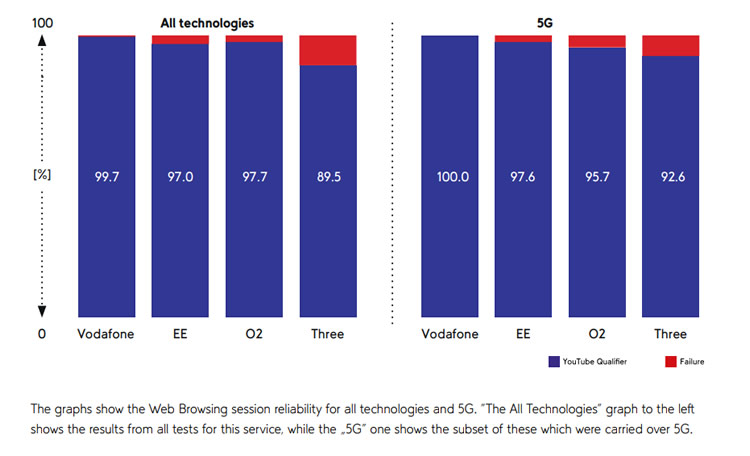 The secret to Vodafone’s 5G success

The key to Vodafone’s capital success, according to the network itself, is that it uses 50MHz of 3.4GHz spectrum, which serves to provide both increased download speeds and excellent coverage for 5G users. Vodafone also points to its use of Massive MIMO technology at more than 95% of its sites as a contributing factor.

Moving forward, Vodafone is deploying Ericsson Dynamic Spectrum Sharing (DSS) technology in the 2.1GHz spectrum band, which will expand the network’s 5G coverage yet further. This will also set the foundation for the next stage of 5G services, such as network slicing.

Vodafone’s Consumer Director, Max Taylor, said: “The results from this report show that our customers are getting the best 5G experience and that our investment in our network is really paying off. In London, our network is the most reliable, and is delivering on the promise of 5G download speeds. Every day we’re bringing this great 5G experience to more customers around the UK.”

Umlaut’s recent round of tests might make Vodafone the top 5G pick in London, but the story is slightly different for the rest of the UK.

Independent testing firm RootMetrics recently found that EE was the best 5G network in the UK overall. In particular, the network provides the broadest 5G access, with better coverage in more cities than its rivals.

Meanwhile, the fastest recorded median 5G speeds were found to be in Leicester on the Three network.

All of which suggests that it pays to do your research when signing up to a new 5G contract. The best network for you will largely depend on where you live in the UK.