By Dean Ramsay and Kevin Thomas 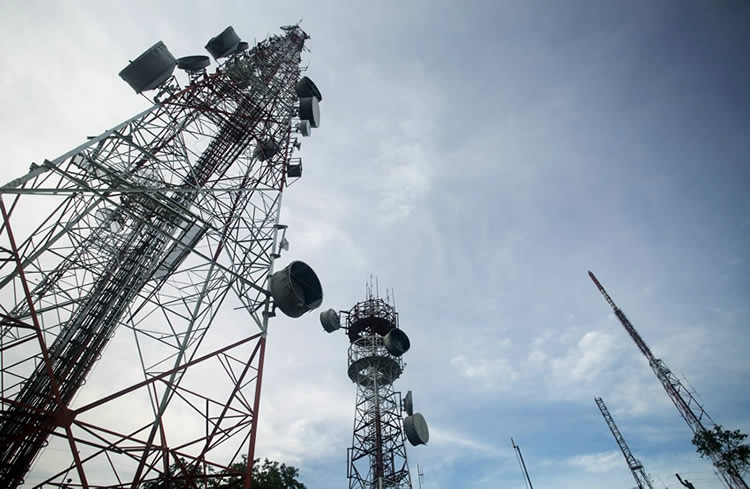 As the UK’s 5G mobile networks are being switched on, new infrastructure is being deployed across the country, generating headline news stories, some of which the telecommunications industry could never have predicted. Here we take a detailed look at the different types of 5G wireless equipment in use in the UK and separate the facts from the fiction.

What is a 5G tower or mast?

The connection between any mobile device and the mobile network operator’s (MNO) network is done using radio signals. The antennas that the MNOs use to send and receive those radio signals need to be high above the ground to avoid interference from objects like buildings and trees, so they are attached to tall metal towers or masts (see above).

For our purposes the terms ‘tower’ and ‘mast’ are largely interchangeable, but engineers refer to towers as a more substantial freestanding structure, and masts as thinner poles with cabling securing them to the ground.

For 5G to work optimally, more radio equipment is being installed, more towers are being built and existing towers are being upgraded all across the country to provide continuous geographical coverage.

As 5G and 4G networks will operate side-by-side for several years to come, some of the new 5G kit is being installed on existing masts, but some 5G-specific antennas are appearing out in the British countryside and in our more built-up urban areas.

What are 5G rooftops and small cells? 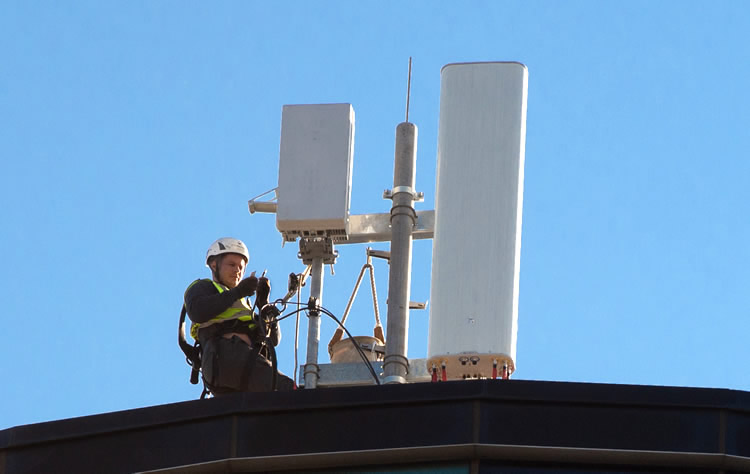 Above shows a 5G rooftop installation here in the UK.

In towns and cities in the UK, MNOs are currently undergoing a process called ‘network densification’ as part of their 5G rollout strategy. 5G needs more cells sites per square mile than 4G did, to provide the hugely increased capacity and data transfer rates promised by the MNOs.

However, the plan isn’t to build hundreds of obtrusive metal towers all over our urban areas, but to have a liberal mix of towers, rooftop installations and much smaller pieces of radio transmission equipment called ‘small cells’ dotted around city streets attached to existing infrastructure, such as streetlights, bus stops and public buildings.

How do 5G towers, rooftops and small cells work?

For 5G, a mixture of different equipment installations are being deployed to ensure that 5G connectivity provides a hugely improved customer experience over existing 4G services. The four UK MNOs (O2, Vodafone, EE and Three) have invested several billion pounds on the first generation of 5G networks, so expectation is high.

Radio access network installations on towers sit at the centre of what is called a ‘macrocell’. A macrocell is the most common type of radio network deployment and is in essence very similar in form and function to the 2G, 3G and 4G deployments that have been around since the 1990s.

The cell site contains antennas for transmitting and receiving radio signals, computer hardware to process the information coming from the network users, and a fixed-line fibre optic connection to backhaul data from the cell site to the MNO’s core network, where the ongoing connection can be made.

These large cell sites are built at an optimum geographic distance from each another so that there is some overlap in the antenna’s coverage pattern, which forms an unbroken blanket of radio coverage across the country.

Each of the four MNOs have now purchased the rights to use different radio bands within the 5G radio spectrum, so their networks will eventually overlap almost entirely. However, the cost of 5G rollout and the somewhat weak return-on-investment calculations that the MNOs have already made, means that more spectrum sharing and network infrastructure sharing is being planned than ever happened for 4G LTE.

In towns and cities, the obvious place to build cell sites is on the rooftops of tall buildings. 5G rooftop installations have the same high powered antennas as tower installations, but to minimise the amount of equipment situated on site, MNOs are now using a technique called ‘fronthaul’ to connect the 5G cell site to their core networks.

This essentially moves all of the processing hardware into the MNO’s data centre leaving just a radio antenna on the rooftop and a small box connected to a fibre optic cable. This has both functional advantages for the MNO and also decreases the aesthetic impact of filling city rooftops with unsightly grey boxes.

As the urban setting contains the highest density of mobile users, rooftop installations are a key element in providing maximum coverage and capacity in the network. This is also the most complex environment for radio engineers to plan for, but new 5G antennas allow directional (or ‘beamforming’) signals to be used to optimally permeate cities with signal, with any gaps being filled by small cells. 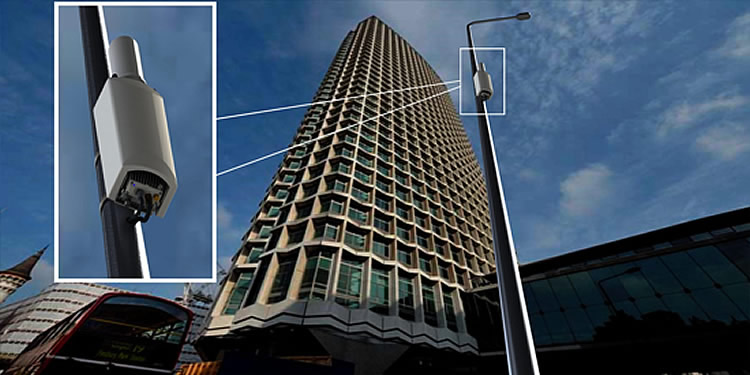 Above shows a 5G small cell install by Arquiva here in the UK.

Small cells are low-powered 5G access nodes that can have a range of between 10 metres and several kilometres, they are much cheaper than a standard macrocell installation and can be more easily hidden in amongst other street furniture. Network densification for 5G is heavily reliant on small cells as the high frequency radio spectrum that MNOs are using for the first time can provide huge data transfer rates, but is not as good at penetrating buildings or other solid objects as the lower frequency signals.

The addition of small cells allows MNOs to accurately build a network with optimum coverage based on the specific layout of a city, eradicating any blackspots.

How are they different to 4G towers, rooftops and small cells?

5G networks have major technical differences to 4G in almost every aspect of their architecture, in the radio access portion of the mobile network this difference is in the antennas. As the underlying core networks have had a serious upgrade, increasing the amount of data they can transfer, at greater speeds, 5G antennas employ a technology called Massive MIMO (multiple input, multiple output). Massive MIMO allows a large number of simultaneous connections without a loss of throughput, so if a single cell has many users streaming services like HD video, it can cope with the load unlike 4G which would degrade the service quality or start to drop connections.

Are 5G towers, rooftops and small cells a health risk?

5G uses bands of the spectrum used by existing mobile networks, but it also uses some higher frequency bands for the first time (referred to as millimetre wave or mmWave), which has caused some concern from the public and tabloid press.

However, before the UK 5G spectrum auctions could be undertaken a great deal of independent scientific research work had been done to guarantee the safety of 5G transmission laws and that UK operators would adhere to international best practice guidelines. Since then Ofcom and the UK government have continued to oversee safety regulations.

Can 5G towers cause cancer or coronavirus?

Even in the mmWave bands, the signals coming from 5G towers are in the non-ionizing radiation part of the electromagnetic spectrum, so the radiation coming from the antennas does not have anywhere near enough power to damage human cells. The International Commission on Non‐Ionizing Radiation Protection (ICNIRP), an international radiation watchdog, confirmed in a 2020 study that the 5G standard poses no health threat in humans.

The conspiracy theory that the Covid-19 epidemic was being catalysed by 5G towers is completely unfounded and the unhappy result of the 5G switch-on coming at the same time of the coronavirus outbreak.

Why are people setting 5G towers and masts alight?

There have been several arson attacks on telecoms facilities in 2020 caused by internet conspiracy theories stating that the 5G signal can spread coronavirus or cause cancer in humans. Many of the towers that were attacked did not even have any 5G equipment and were part of the existing 4G LTE networks.

Did 5G cause the Corona virus outbreak?

No. 5G has nothing to do with Corona virus and it is impossible for a radio signal of any sort to transmit a virus to humans.

Does 5G cause cancer?

No. 5G in the UK utilises a part of the electromagnetic spectrum which is safe for use around humans and animals. Many studies, including one by the NHS, have concluded that mobile phone usage has no substantial link to cancer.

Do Huawei build 5G towers for the UK?

Huawei are one of the largest network equipment provider and software vendors in the world and all four of the UK’s MNOs use their products and services. The company’s aggressive pricing strategy over the last decade means that Huawei equipment and software has been a massive part of the UK’s 4G network architecture but its role in 5G in the UK will be severely curtailed by governmental order.

Yes. The telecoms industry in the UK has extremely rigorous regulations surrounding the testing of any kind of radio transmission equipment, not only on humans. For more information, see: https://5g.co.uk/guides/how-safe-is-5g/

This may be difficult. The UK telecoms regulator Ofcom does not hold information about MNO’s plans for where and when they may deploy 5G and in a 2020 Freedom of Information Right to Know request it stated that the MNOs’ websites contain information relating to their future plans for 5G deployment and that no central list is kept for security reasons. Checking coverage maps for your post code will tell you whether there is 5G availability in your area and therefore a 5G cell site somewhere thereabouts.

Who decides where masts are built?

The four MNOs decide where they would ideally like to locate their radio networks assets, but of course an extensive process of application to build a mobile base station must be followed which sometimes involves planning permission applications, regulatory involvement and commercial deals depending on who owns the land on which they intend to build.