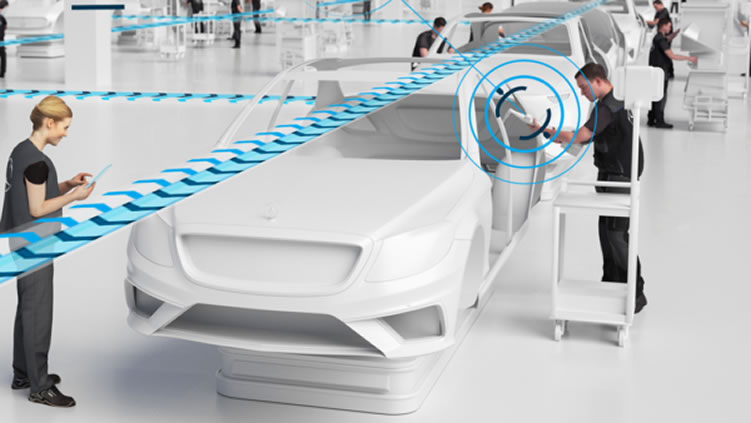 Mercedes-Benz is building a state-of-the-art car production plant in Sindelfingen, Germany, that will rely on 5G and WiFi to connect machines and production systems throughout the new 20,000 square meter facility. Ericsson and Telefonica Germany are currently working together to construct the private 5G network, which will be handed over to the car manufacturer for operation when it is completed.

Mercedes-Benz claims the private 5G network in the new “Factory 56” will be the first time the mobile technology is applied to auto production. The car maker said that it expects to take the learnings from this first deployment and incorporate them into future implementations in other plants.

According to Mercedes-Benz, having its own local infrastructure is important for supporting its smart manufacturing ambitions and make current production processes more precise, flexible and efficient. With its own 5G network, the car manufacturer aims to optimise existing production by, for example, linking product tracking data to the assembly line. It expects that by connecting production systems and machines, the efficiency and precision of the processes will be improved. Another benefit of running a local network is that sensitive production data does not need to be shared with third parties outside the secure network.

The company also notes that a local network is essential for 5G because the new technology requires short distances to meet its full capability.

Jörg Burzer, Member of the Divisional Board of Management of Mercedes-Benz Cars, Production and Supply Chain, says: "As the inventor of the car, we are taking digitalization in production to a whole new level. With the installation of a local 5G network, the networking of all production systems and machines in the Mercedes-Benz Cars factories will become even smarter and more efficient in the future. This opens up completely new production opportunities.”

Mercedes-Benz is not alone in its private 5G network ambitions as enterprises look to take advantage of high-speed wireless networking to support Internet of Things (IoT) and Industry 4.0 applications. Audi recently announced a 5G network trial with Ericsson, for example.

Regulators are also working to support industry needs by making 5G spectrum available for private use. In the UK, Ofcom is expected to announce a decision soon about offering local licenses for spectrum in the 3.8 GHz to 4.2 GHz spectrum band for private 5G networks. The regulator’s goals in offering local spectrum licenses to new players are to encourage innovative use of the spectrum, support new services and improve wireless broadband coverage for all types of users.