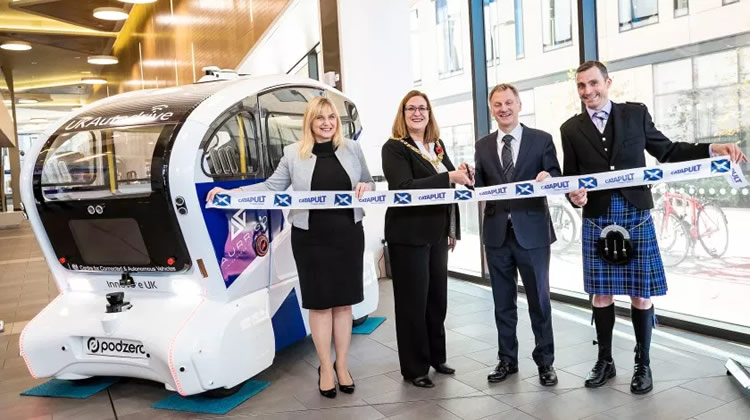 UK mobility innovation centre Transport Systems Catapult (TSC) is opening an office in Glasgow to expand its expertise and facilitation services across Scotland.

TSC, a not-for-profit, says the move will enable Scottish companies and transport schemes to better access funding and play a more significant role in the emerging ‘mobility economy', estimated to be worth £1.4 trillion.

Research projects facilitated by TSC bring together academia, SMEs and start-ups, as well as established industry players. The University of Aberdeen and Heriot-Watt University in Scotland, for example, have already participated in TSC initiatives looking at issues such as connected and autonomous vehicles (CAVs), emissions and air pollution, air traffic communications, and speeding up emergency response times.

TSC focuses on the opportunities offered by intelligent transport and emerging modes and transportation technologies. It was the first organisation to trial driverless pods on UK streets, for example – in the City of Milton Keynes. The driverless pod pilot is now coming to a close, and the results were showcased for the first time at the Glasgow TSC launch event this week.

Helen Wylde, Chief Engagement Officer at Transport Systems Catapult, said: “There’s a huge potential for Scottish universities, government and SMEs to play a central role in the development of new transport innovations and, ultimately, realise life-changing benefits for consumers while creating more efficient and environmentally friendly choices. We hope to facilitate further innovation and nurture continued expansion of the sector.”

Some say that 5G networks will make futuristic transportation such as autonomous vehicles and widespread use of drones a reality – particularly due to the technology’s low latency.

Later this week, TSC is taking part in a UK 5G Innovation Centre event about 5G and its impact on the freight and logistics sector.

The workshop is part of the Department for Culture, Media & Sport's (DCMS) 5G Testbeds and Trials programme, and it aims to help shape government support for 5G research and development in the UK’s freight and logistics sector.