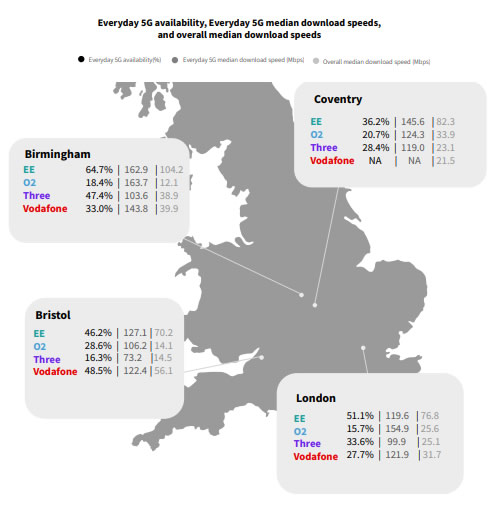 RootMetrics has proven itself a great source for 5G speed and availability data, and its latest report paints a more up to date picture of each major network’s performance in London, Birmingham, Bristol and Coventry.

The report – covering the first half of 2021 – suggests that EE was the best performing network overall, with the highest ‘Everyday 5G’ availability in London, Birmingham and Coventry, at 51.1%, 64.7%, and 36.2% respectively.

Everyday 5G combines results recorded on 5G-only with those on 5G mixed mode (where a user switches between 5G and 4G during the same data task). With 5G coverage being patchy, RootMetrics argues that this is more representative of the typical 5G experience than just looking at 5G alone (though this report also does that, as we’ll get to further down).

EE’s 5G-only availability meanwhile was highest everywhere except Bristol, with the best availability being 56.3% in Birmingham, and its 5G-only median download speeds were also consistently high, with its best being 167.5Mbps (again in Birmingham).

And it’s showing improvements from the previous report, with its Everyday 5G availability growing in all tested cities other than Birmingham. In Bristol, its Everyday 5G median download speed also grew significantly, from 94.4Mbps in the second half of 2020.

Then there’s Three, which showed strong 5G availability (both 5G-only and Everyday 5G), second only to EE in most cases. Its highest for 5G-only was 37.3%, rising to 47.4% for Everyday 5G, both in Birmingham.

Where it did worse was 5G speeds, which in all cases were lower than the other networks (other than Coventry where Vodafone didn’t have any results). Three’s highest median 5G-only speed in this test was just 130.1Mbps, while its highest Everyday 5G median was 119Mbps, both in Coventry.

However, the report suggests that things are heading in the right direction, with that final Coventry result being higher than on the previous report. Three’s 5G availability is growing too.

Finally, we have Vodafone, which seems like a sold all-rounder, posting respectable speeds and availability in most cases, other than Coventry, where as noted it had no 5G at the time of the tests.

Vodafone’s top Everyday 5G availability was 48.5% and its top 5G-only availability was 42.5%, both in Bristol. Its top Everyday 5G median download speed meanwhile was 143.8Mbps and its top 5G-only one was 153.2Mbps, both in Birmingham. But outside Coventry it performed solidly across the board, posting scores that weren’t typically the best, but weren't the worst either.

RootMetrics also notes that Vodafone’s Everyday 5G availability increased from the previous report in the three tested cities where it had a 5G presence, and that its Everyday 5G median download speed increased substantially in Bristol, from 105.7Mbps to 122.4Mbps.