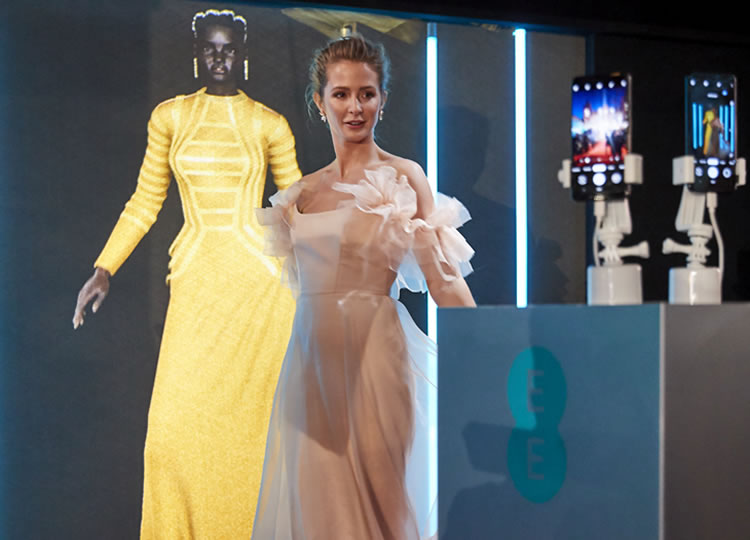 In a somewhat novel way of showcasing the possibilities of low-latency and high-speed next-gen mobile networks, EE lauded what it called the “runaway success” of its 5G-powered ‘AI Stylist’ at the British Academy Film Awards (BAFTA).

Here’s how it worked. By using a digital ‘supermodel’, going by the name of Shudu, EE created a holograph which appeared on the red carpet. Using a mixture of 5G and artificial intelligence (AI) technology, the AI Stylist could also be accessed from home through an online chatbot.

The clever bit was that chatbot users could ‘interact’ with Shudu in pretty much real-time – recorded latency speeds were a sprightly 15 milliseconds – and receive tailored tips about how best to emulate the red-carpet looks without spending a fortune.

In a testimony to AI muscle-power, which was provided by London-based visual search startup Snap Tech, EE claimed that the AI stylist was able to detect and learn the differences between items of clothing based on cut, shape and fabric patterns. Using this knowledge, Shudu then ‘recognised’ each stars’ outfit and then searched thousands of affordable alternatives online to find a match. Recommendations also factored in the stated preferences of each chatbot user.

EE reported that the over 40,000 fashion-conscious users chatted with the AI Stylist on the night.

In concert with Ericsson?

The BT-owned operator did not explicitly mention which infrastructure supplier it was working with for its BAFTA night performance, although Ericsson appears to be putting much effort into developing 3D‑holographs based on 5G’s higher speeds and lower latency capabilities.

In November 2018, Cosmote Greece, in collaboration with the Swedish manufacturer, held what it claimed was the first 5G‑based holograph concert in the country. The concert comprised human holograms. Other potential uses for 3D-holographs, said Ericsson, included medical imaging, video conferencing, and gaming.