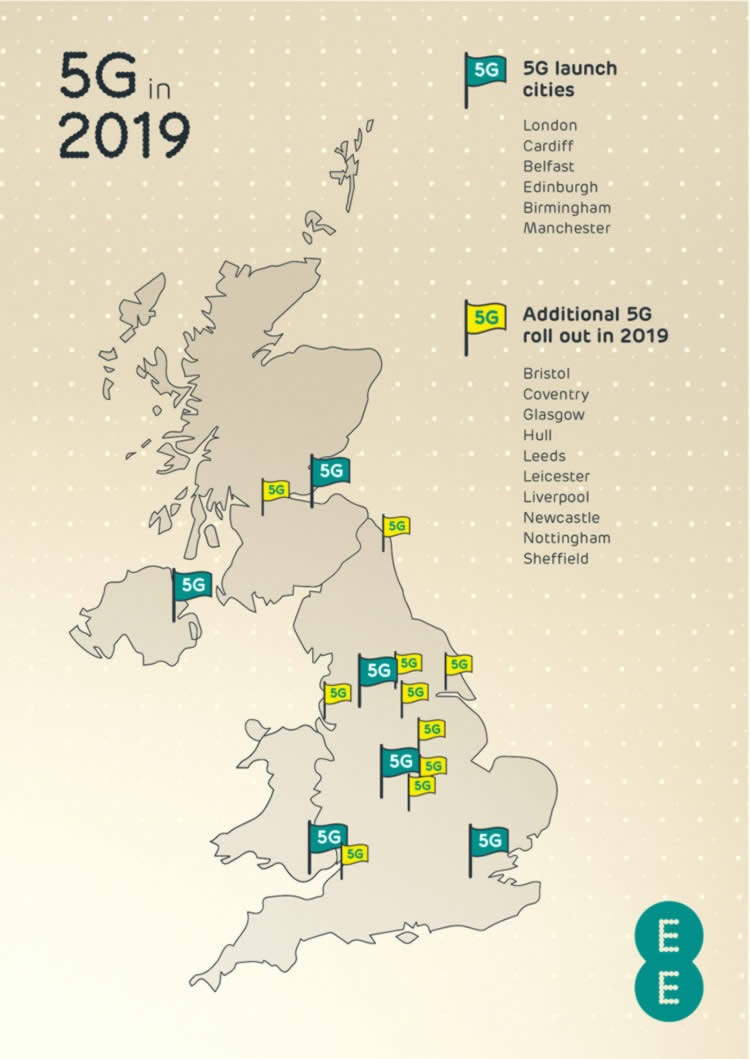 We already knew EE was launching its 5G network in 2019, but now we know where, as the company has confirmed that London, Cardiff, Belfast, Edinburgh, Birmingham and Manchester will be the first cities to get it.

Or rather, parts of them will be. Don’t expect city-wide coverage on day one, as EE is focused on the areas that are busiest, such as Hyde Park in London, Manchester Arena, Belfast City Airport, the Welsh Assembly, Edinburgh Waverly train station and Birmingham’s Bullring.

Throughout the rest of 2019, EE will work on extending its 5G coverage to parts of Glasgow, Newcastle, Liverpool, Leeds, Hull, Sheffield, Nottingham, Leicester, Coventry and Bristol.

Its focus again will be on the busiest areas of those cities, which makes sense, as these are the areas that will most benefit from faster, more reliable data. The network notes that the first 1,500 sites it’s upgrading to 5G carry 25% of all data across the whole network, despite only covering 15% of the UK population.

5G on your phone and in your home

Alongside this announcement, EE has said that 5G smartphones from multiple partners will be available on the network. It hasn’t named names, but we know for example that Samsung, Huawei, LG, OnePlus and others are all working on 5G phones.

EE also revealed that it plans to make a 5G Home router available, giving people the option to use 5G broadband in their home.

Ahead of all this, EE is upgrading transmission to 10Gbps links at each 5G site, and both EE and BT (which owns EE) are virtualising elements of the core network for the 5G rollout, as well as constructing a next generation 5G core (in line with the next stage of global 5G standards) on a cloud native infrastructure.

EE still hasn’t given an exact date for when its 5G service will launch, but we imagine it would be in the second half of 2019. And while this is an EE announcement, we may well see 5G offered by BT Mobile at around the same time, since BT owns EE.