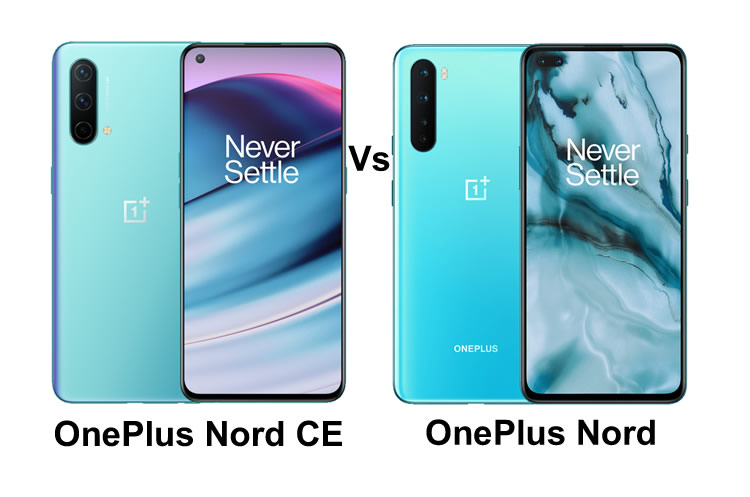 The OnePlus Nord range is becoming crowded now, with four models landing in under a year, but the original OnePlus Nord remains one of the best, as does the OnePlus Nord CE – a phone which it could easily be confused with.

To help make matters less confusing we’ve compared the two phones across all the categories that matter, including their design, screen, power, camera, battery life and price, so you can see exactly how they stack up.

You’ll then have all the information you need to make a purchasing decision, so read on and see which OnePlus Nord is right for you.

They also both have a flat screen with minimal bezels and a camera cut-out in the top left corner – though on the original OnePlus Nord this is dual-lens, while the OnePlus Nord CE has just a single-lens one.

The biggest difference though is the material they’re made from, with the OnePlus Nord having a glass back, while the Nord CE settles for plastic. You also get a 3.5mm headphone port on the OnePlus Nord CE, which is lacking from the standard Nord.

That also means it has marginally more pixels per inch, at 410 to the OnePlus Nord’s 408, but that won’t be a noticeable difference.

Both phones also have a 90Hz refresh rate and a 20:9 aspect ratio, however there is one other display difference, namely that while the OnePlus Nord is certified for HDR10+ content, the OnePlus Nord CE doesn’t support HDR. So you won’t be able to make the most of HDR content on the Nord CE. Otherwise though, these screens will provide almost exactly the same experience.

Similarly, the Nord has a slightly better GPU than the OnePlus Nord CE, with the former having an Adreno 620, while the latter has an Adreno 619.

However, despite the lower number in its name, the 750G in the Nord CE actually offers up to 20% better CPU speeds than the OnePlus Nord, though the original Nord has the better GPU, for improved gaming performance. In practice though you should expect fairly slick performance from both phones.

So you lose the macro lens with the Nord CE and get fewer megapixels in the depth sensor, however on the flip side the main camera has more megapixels.

The differences continue on the front as well, with the OnePlus Nord packing both a 32MP main selfie snapper and an 8MP ultra-wide one, while the OnePlus Nord CE has just a single 16MP selfie camera. The OnePlus Nord can also shoot video in higher quality on its front camera than the Nord CE, at 4K rather than 1080p.

So the standard Nord is more versatile on both front and back, but if all you care about is megapixels then – for the main camera anyway – the OnePlus Nord CE has the edge.

The OnePlus Nord CE is the clear winner when it comes to battery size, packing in a 4,500mAh one, while the OnePlus Nord has 4,115mAh. That should translate to better battery life for the Nord CE as well, given the mostly similar specs.

Charging speeds are the same on both at 30W, allowing you to get from zero to 70% in just 30 minutes.

As for memory, there’s a choice of 128GB or 256GB in both, and both phones also support speedy 5G.

On contract, it will depend on the network and allowances of course, but you can find the OnePlus Nord CE from around £21 per month, while the OnePlus Nord starts at roughly £20 per month. So it’s an unusual situation where the standard Nord is the more expensive phone SIM-free, but slightly cheaper than the Nord CE on contract.

Conclusion - with pros and cons

The OnePlus Nord CE was launched as a slightly cheaper alternative to the OnePlus Nord, but depending on how you buy it that’s not always the case now. So does that mean you should always opt for the original Nord? Not necessarily.

The OnePlus Nord wins for camera versatility and it also has a more premium build and a marginally better screen. But the Nord CE has better battery life and the bonus of a headphone port, along with theoretically slightly more power for general (non-gaming) tasks.

So you should choose the phone that has the best combination of features that you care about. But the good news is that both of these Nord models are strong all-rounders, so for the money you shouldn’t find them lacking in any area.