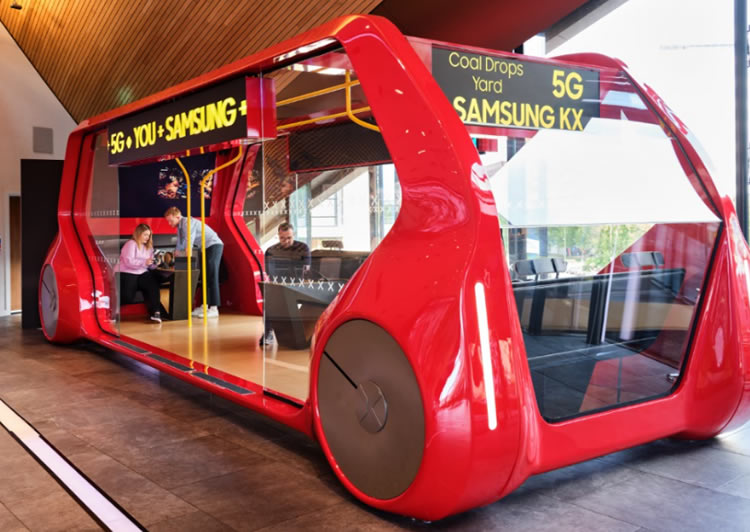 5G is rapidly rolling out across the UK, but so far consumers are mostly using it simply in phones or for 5G home broadband. Yet that’s just the beginning of 5G’s potential, and Samsung has set up a 5G bus installation to show off some of the things it might be used for in future.

The 5G bus is a replica of a London bus, housed in Samsung KX at Coal Drops Yard (near King’s Cross station), but this bus doesn’t move – instead, it houses demonstrations of 5G technology.

There’s for example a gaming zone on board, which allows guests to play Xbox One games on a Samsung Odyssey G9 Curved Gaming Monitor, controlled by either a standard Xbox controller or a Samsung Galaxy Note 20, and mirrored – using 5G – to an 82-inch Samsung QLED 8K TV.

Samsung seems to suggest that one day commuters on real public transport could play multiplayer games together on these massive screens, leveraging the power of 5G.

Samsung also highlights that the 5G bus allows for remote working, letting you virtually log on to your home office computer from a tablet on board, and for smooth streaming of Spotify, Netflix, and the like. These sorts of applications we are already seeing – though they’ll work a lot better once more bus routes have 5G coverage throughout.

The new 5G bus installation also includes a home office zone and an interactive bus shelter where – were this a real bus shelter – you could kill time on 5G while waiting for your connected transport to arrive.

This of course is as much a demonstration of Samsung devices as of the power of 5G, and we’re not sure how practical multiplayer gaming on expensive screens will ever be on a bus, but one day soon data speeds won’t be the limiting factor. If you want to check out the 5G bus for yourself, you can – just head to Samsung KX.