Crowd-sourced data from Opensignal (a mobile analytics company) has given us our clearest idea yet of how 5G fares in the UK, and while the results are mixed they’re largely positive, with average 5G download speeds reaching 138.1Mbps.

That’s 5.6 times faster than 4G, which sits at just 24.9Mbps, and even far faster than Wi-Fi at 34.1Mbps (though it’s not clear what kind of Wi-Fi is being tested – e.g. whether free Wi-Fi hotspots are included or just the internet in people’s homes). 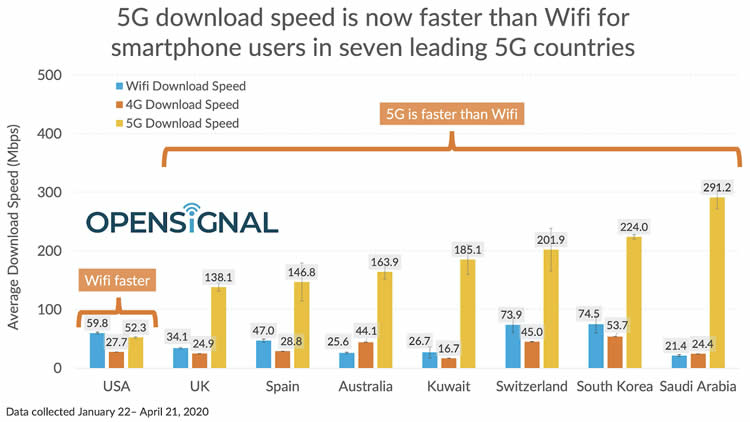 On the face of it that sounds promising – and it is, but it’s worth noting that this 138.1Mbps is at the low end of average estimates provided by networks, as well as being way below what 5G is theoretically capable of – already the UK’s 5G networks say peak speeds could exceed 1Gbps.

While we won’t dwell on other countries, the UK’s average 5G download speeds are also lower than six of the seven other tested nations. In some cases by a long way. 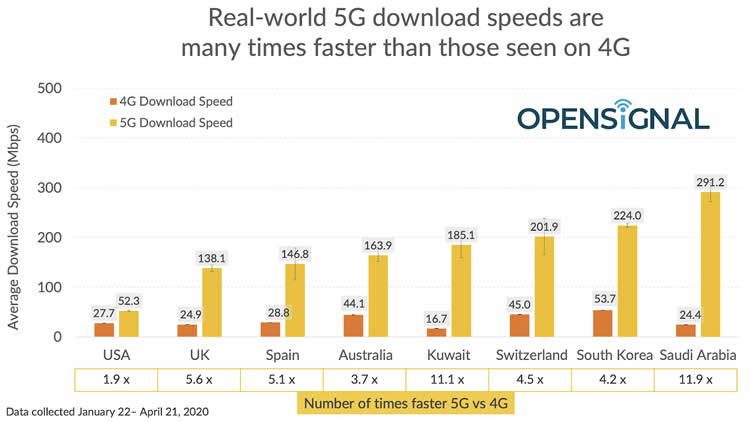 And there’s the question of availability – while 5G is undeniably fast when you can get it, the same report found that 5G was only available to users 5.2% of the time in the UK, compared to 89.5% of the time for 4G. So in other words, many people paying for 5G now won’t actually be getting it most of the time.

That said, all of these issues have easy explanations and are likely to be overcome over time.

Low 5G availability is largely down to the fact that the UK’s networks are still in the early stages of rolling out their 5G services. 4G took years to become as widely available as it is now, and we’d expect 5G will match or exceed it eventually, with progress likely to be rapid. 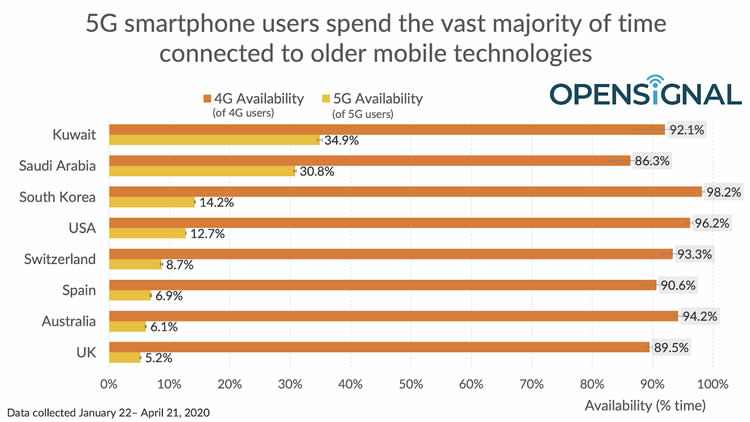 As for speeds being both lower than 5G should be capable of and than some other countries, that will largely be down to the amount of spectrum used by networks. The more 5G spectrum (and particularly the more contiguous 5G spectrum) a network uses, the better the speed and experience is likely to be, and in the UK only Three actually has ideal numbers, coming in at 140Mhz, while other UK networks are at 40MHz or 50MHz.

That will change soon though, as Ofcom is planning to hold additional 5G spectrum auctions, giving networks the chance to increase their spectrum holdings. In fact, the next 5G spectrum auction was set to happen around now, but the ongoing Covid-19 pandemic has held it back.

Opensignal notes that the quality of each network’s backhaul connections (the way each mast is connected  to the main network) can also affect performance, and this too is being worked on, with for example Virgin Media recently signing a deal with Three to connect more than 3,000 of Three’s 5G sites to dark fibre cables.

So there’s lot of room for improvement in the UK’s 5G, but there’s plenty of evidence that those improvements will happen fast. And even now, 5G provides far greater performance than 4G or in many cases even Wi-Fi – suggesting it could even make for a strong home broadband option.