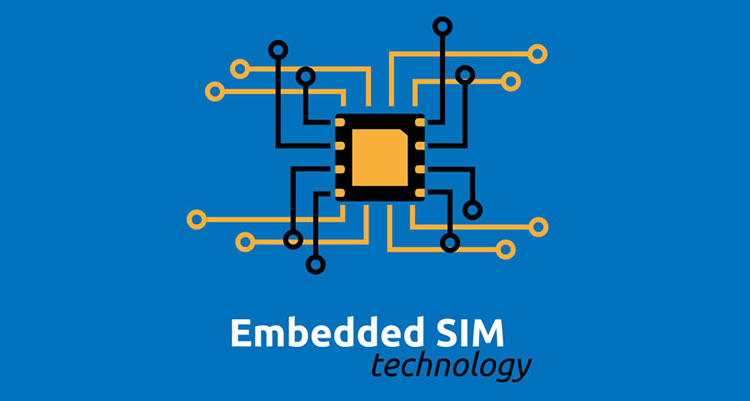 SIM cards have become an accepted part of smartphone ownership. We take it for granted that when we buy a new phone, we need to transfer a tiny chunk of plastic from our old handset if we want to carry our phone number across.

But did you know that the SIM card is a completely pointless piece of equipment, and that it's quite possible to fulfil the SIM card's role electronically?

So-called eSIMs have a number of advantages over physical SIM cards. Not only are they technologically possible, they're actively available right now from all major UK operators.

So what exactly are eSIMs? Why has it taken so long to switch over to them? Which UK operators offer eSIMs? And how do you obtain one?

Now you can pick up an eSIM on all major networks in the UK. Here’s everything you need to know about these eSIMs and how to get set up with one.

What is an eSIM?

SIM cards are those small bits of plastic that operators give you to make your phone number work with your phone.

Embedded SIMs, or eSIMs, fulfil the exact same function, but they make the process of changing your number or network a virtual one.

As the name suggests, these eSIMs are embedded as a permanent part of a smartphone’s motherboard. When you change network or phone number with an eSIM, it involves a simple software update rather than a physical transfer process.

Advantages and Disadvantages of eSIMs

Using an eSIM means that you’ll never lose or break this essential part of your phone, as is possible with old fashioned physical SIMs. It also lessens the likelihood of damaging your phone, as removing a SIM can be a fiddly process.

Because sign up is virtual, you no longer have to wait for a network to send you a physical SIM card through the post.

eSIMs take up much less space within a smartphone than a physical SIM. They’re around half the size of a nano SIM, and they don’t require the same elaborate housing mechanism (such as the removable SIM tray). That’s precious space that  could potentially be used for bigger batteries, more water-tight designs, or simply smaller phones.

The virtual nature of the eSIM means that they can hold multiple profiles simultaneously. You could conceivably switch between up to five numbers and operators across multiple countries with a simple tweak in your phone’s settings menu.

When your phone breaks, it’s easy to quickly switch a physical SIM to a new device. With eSIMs, the process is more laborious, and requires that you order a new eSIM pack from your network.

If you’re concerned about the ability for phone companies to track you, then eSIMs are potentially problematic. You can physically remove that ability with a SIM card, but not with an eSIM.

If you like to switch a single number between multiple phones, you’re better off with a physical SIM. With eSIMs you’ll need to go through the process of requesting a switch from your network each and every time.

As of November 2021, all four of the UK’s major mobile networks (namely EE, Three, Vodafone and O2) support eSIMs.

Ubigi is a specialist global eSIM company that also operates in the UK.  It offers a range of affordable prepaid data plans for smartphones, tablets and laptops and connected cars.

As for the type of network, both 5G and 4G support is included with your eSIM. That’s because the determining factor here is the 5G-readiness of your phone, as well as your own network’s level of 5G coverage in your area, rather than the eSIM itself.

Note, however, that most dual-SIM 5G phones only permit one 5G connection at a time. It’s something to bear in mind if you’re running two numbers from a single phone.

The Motorola Razr, as offered by EE, is one of very few phones to use an eSIM exclusively. The vast majority of phones that support eSIM will also support a physical SIM.

Indeed, you can usually tell which modern phones support eSIMs by looking out for a ‘Dual SIM’ designation on the box or spec list – in some cases that means two removable SIM cards, but increasingly one of them will be an eSIM. The UK networks list support for eSIM phones that include newer models of the iPhone, Google Pixel, and Samsung Galaxy family.

Note that while the phones in the chart above all support eSIM, they won’t necessarily all be available with an eSIM from every network that offers eSIMs. Note also that in addition to phones there are a selection of tablets (mostly iPads) and smartwatches that support eSIM.

How to set up an eSIM

Assuming you’ve checked that your phone supports eSIM, first ensure that your phone has Wi-Fi turned on. Then, if you received an eSIM QR code from your network, scan it in using your phone’s camera app. Your eSIM will install your profile automatically. If you’re prompted to install a ‘Data Plan’ or a ‘Mobile Plan’, do so.

Alternatively you may have to use your network’s app or website to set up your eSIM. You should have full instructions from your network to do this, but the process basically involves launching the app or loading your account on the website from the device you want the eSIM on (so you’ll need to be connected to Wi-Fi), then selecting the download eSIM option. As above, you should select to add ‘Data Plan’ and ‘Mobile Plan’ if asked.

You may also have the option to bring up an eSIM QR code on the network’s website or app. This will require you to open the website or app on a different device, then to scan the QR code with the device you want to add the eSIM to.

How to switch from a physical SIM to an eSIM?

Just contact your network and ask them to make the change from SIM to eSIM. They’ll typically send you an eSIM pack with a QR code. Follow the relevant operator links listed above to initiate the switch.

Note that if you are using a dual-SIM phone with an active eSIM, you might be charged roaming fees on both lines when you go abroad. Our recommendation would be to go in and deactivate the secondary SIM whilst travelling abroad, just to be sure that you don’t get any nasty billing surprises.

What is an eSIM?

An eSIM is an Embedded Subscriber Identity Module. Like a regular SIM, an eSIM contains everything needed to connect you to your unique phone number.

However, whereas physical SIMs can be physically removed and swapped between smartphones, eSIMs are a fixed internal component. Any changes made to your account, network or number are done virtually.

If your particular phone supports 5G, and your network covers 5G in your area, then yes. 5G support won’t be a problem.

How do I get an eSIM?

Contact any of the UK’s big four mobile operators (EE, Three, Vodafone or O2), whether online, over the phone, or in one of their high street stores, and ask to get set up with an eSIM.

How do I set up my device for eSIM?

Once you’ve requested an eSIM from your network operator of choice, you will typically be sent a pack either in the post or digitally. This will include a QR code which, when scanned in with your phone, will install all the relevant eSIM information. In some cases, your eSIM might alternatively be installable from your network’s app or website, but you will be provided full instructions if so.

Can I move an existing line from a physical SIM to an eSIM?

Yes you can. Again, just contact your network operator and request the move, and they’ll supply you with an eSIM pack.

Are eSIMs a fad or the future?

eSIMs are the future for the benefits listed above, though they won’t be ubiquitous for some time yet. According to a 2019 report from analyst firm Ovum, eSIM-enabled phones will rise from 5% of all smartphones in 2020 to 20% by 2024. Similarly, a 2020 report from Kaleido Intelligence found that eSIMs will connect 2.4 billion devices in 2025, up from 36 million in 2019.

Do any other devices use eSIMs?

eSIMs have been used in several generations of Apple’s iPad family, and also in numerous smartwatches, including the Apple Watch and Samsung Galaxy Watch. Its use in the smartphone form factor perfectly illustrates the space saving potential of going with an eSIM over a physical SIM.

Certain laptops can also make use of eSIMs, as can modern connected cars.