O2: Upgrade to 5G or lose out on savings of £6 billion 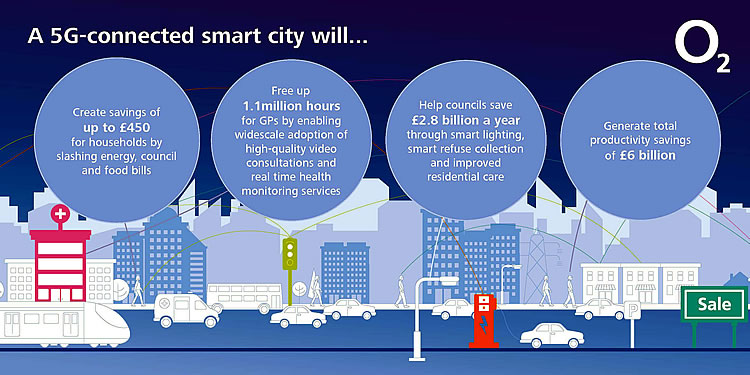 A new report from O2 has warned that the UK needs to upgrade to 5G “now” or it could miss out on a range of economic and social benefits, including up to £6 billion a year in productivity savings.

The report forecasts that 5G will help households save up to £450 a year on energy, council tax and food bills. O2 says food waste will drop too with the introduction of smart fridges, and electric cars will slash fuel costs from 2025 when 5G will ensure energy grids can cope with large-scale charging of electric cars.

The analysis forecasts that councils will claw back £2.8 billion annually through implementing technologies such as smart lights and connected bins. The report even says that 5G will free up 1.1 million GP hours in the NHS because it will enable remote health services and monitoring via wearables.

According to O2, further productivity savings will come from predictive maintenance on railways as well as reduced road congestion thanks to 5G-enabled traffic management and connected route planning apps.

O2 CEO, Mark Evans, highlighted that mobile connectivity is essential when it comes to keeping society moving. But, he warned: “None of these benefits are assured.” He called for greater collaboration between industry, government, landlords and developers to support the rollout of 5G and to “hardwire 5G into the fabric of our cities”.

How soon is now?

The O2 report calls for an upgrade “now” but in the UK 5G isn’t slated to begin roll-out until 2020, according to the government’s 5G strategy. It looks set to happen more quickly in countries such as the US, South Korea and Japan.

However, 5G trials are ongoing to pave the way for 5G to be launched widely. The UK government has committed £25 million to invest in UK 5G testbeds. Earlier this week, contracts were awarded to six companies to install testbeds at six locations.

Last month, O2 announced that it will it run a 5G trial at The O2 arena in partnership with AEG. Visitors to the venue should be able to start trying out the 5G network later this year. Demos will include virtual reality, augmented reality and live streaming applications.

Derek McManus, 02’s Chief Operating Officer, said: “While 5G promises a range of unprecedented benefits, we should be clear that these won’t be achieved without collective investment and collaboration. That means complete alignment from operators, public service providers, local authorities, landlords and technology companies to explore new opportunities for better connectivity and denser coverage.”

Useful guide: What are 5G Testbeds?