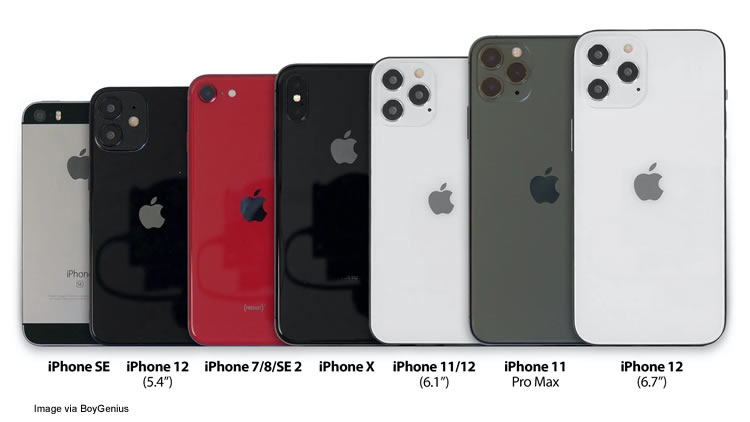 Apple doesn’t make as many phones as the likes of Samsung or Huawei, but despite that there are a wide range of different iPhone sizes available. Just in 2020 for example it launched models that included the tiny 4.7-inch iPhone SE (2020) and the massive 6.7-inch iPhone 12 Pro Max.

Those two phones are clearly made with two very different buyers in mind, and the in between sizes will also suit different people. So which size – and phone – is best for you? Below we’ll look at all the modern options to help you make the right decision.

Which iPhone size is best for me?

Below we’ve divided Apple’s iPhone range into three different size categories – large, medium, and small. For each you’ll find things to consider when choosing both a size and a specific phone.

Large iPhones (6 inches and above)

Opting for an iPhone in this size range means you’ll get a big screen of course, which is better for watching videos and viewing photos on than a small screen. If you’re a gamer it will also benefit you there, since the touch controls will be less cramped. And those benefits increase as you go up in size – so the iPhone 12 Pro Max is the best for all of these.

The main downside to a big iPhone is that it’s potentially too large to fully use with one hand – certainly, the iPhone 12 Pro Max will be for most people, and even the 6.1-inch models will be if you have smaller hands. You won’t be able to reach the top edge of the screen, meaning you can’t operate the phone while holding something in your other hand.

The large size also makes these phones slightly heavier and a bit less pocket-friendly – if you have small pockets and plan to keep your phone in them, you should check whether one of these iPhones will actually fit.

That said, all of these large models use a modern iPhone design, meaning a notch at the top, but hardly any bezel otherwise. As such, there’s hardly any wasted space, so the overall dimensions aren’t as big as you might expect. In fact, the 6.1-inch models are overall smaller than some of Apple’s older 5.5-inch phones, which did have big bezels.

You can see the full dimensions for each of these big iPhones in the chart above, along with details of their screen.

Note that OLED screens are better than LCD ones, and that beyond that the newer iPhones typically have better screens than the older ones – so if you want the best possible quality, newer is generally better (though an older OLED will trump a newer LCD model). Support for HDR is also beneficial, as it makes HDR content look its best.

Of course, this website being 5G focused we’d be remiss if we didn’t also point out that of the large iPhones, only the iPhone 12, iPhone 12 Pro, and iPhone 12 Pro Max support 5G – so if you want the fastest (and most future-proofed) mobile data technology, you should definitely be considering one of them.

Apple used to make a lot of iPhone models in the 5 to 6-inch range, which we’re considering ‘medium’ size, but in the last few years it has only made three, so there’s a lot less to choose from here than if you want a large iPhone.

These for the most part are usable with one hand – particularly at the lower end of the size range, with the iPhone 12 Mini being particularly one-hand friendly.

They’ll also more comfortably fit in smaller pockets, but this all comes at the expense of having an expansive screen to enjoy media on.

If you tend to use a phone mostly as a phone, have small hands, or often operate your phone while holding other things, then a model in this size range could make for an excellent choice, but they are all smaller than not just most other modern iPhones, but also most modern smartphones in general.

It’s worth noting additionally that the iPhone 12 Mini is the only model in this size range that supports 5G.

In terms of modern iPhones with screens of under 5 inches, the only one made in the last few years is the iPhone SE (2020). That’s a big change for Apple, which has many older phones in this size – but they’re old enough that we can’t fully recommend them.

The iPhone SE (2020) then has a 4.7-inch screen, which is absolutely tiny by modern standards, so it’s very easy to operate with one-hand, but won’t be great for media. It’s all the worse on the media front because it uses LCD, while other modern iPhones have OLED screens, which offer blacker blacks, and better contrast. There’s also no HDR support here. This however all keeps costs down, making the iPhone SE (2020) the most affordable modern iPhone you can buy.

However, something else to bear in mind with it is that it sports Apple’s old design language (despite launching in 2020). That means there are big bezels above and below the screen, which in turn mean the handset as a whole is actually slightly larger than the iPhone 12 Mini – though it’s still the second smallest modern iPhone.

Being so cheap it of course doesn’t support 5G.