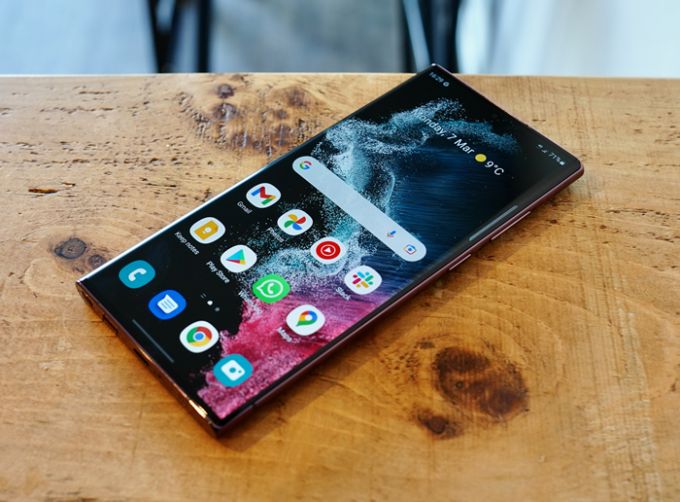 The Samsung Galaxy S22 Ultra is a beast of a smartphone and the perfect productivity device, yet its high price and a few niggles hold it back from being the definitive handset of 2022.

The Samsung Galaxy S22 Ultra is designed to be Samsung’s ultimate smartphone – a handset for those who genuinely want no compromises in their device.

It’s also designed for fans of the Samsung Galaxy Note range, as it inherits many features of those phones.

So there’s a lot going on here, and the big question is whether it all comes together – and whether the Galaxy S22 Ultra justifies its mammoth price. Spoiler alert: for the most part it does – this is a stunning smartphone with almost endless features and top-tier specs. But it’s not a perfect phone. Not quite. 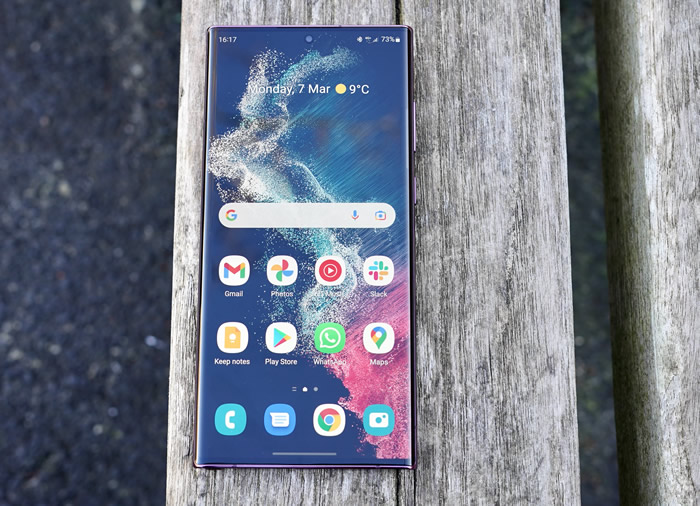 Screens are one thing that Samsung always does exceptionally well with its high-end handsets, and the Samsung Galaxy S22 Ultra has the company’s best display yet.

It has a 6.8-inch 1440 x 3088 AMOLED screen with a 120Hz variable refresh rate that can drop all the way down to 1Hz when a speedy refresh isn’t needed, saving battery in the process.

The display has 500 pixels per inch, so it’s sharp, and it supports HDR10+, and has a peak brightness of 1,750 nits, which means it can get brighter than almost any other phone.

It’s slightly curved too, and images appear accurately coloured, complete with deep blacks (helped by the use of AMOLED tech). If you want vibrancy though then you can switch the display colour mode for some vivid visuals instead.

In short, this is a tech-packed screen, offering great – and customisable – visuals, and delivering some of the best imagery you’ll find on a phone, and on a large scale too as it’s so big.

Now that the Note range is no more, this is a distinctive look, though whether you prefer it to the rest of the S range will be subjective.

Certainly, we’re not huge fans of the floating camera lenses here – the metal camera block of the rest of the range looks better to our eyes, but you may disagree.

What’s not up for debate is how premium and well built this phone is. It uses Gorilla Glass Victus+ on both the front and back, making those glass panels far stronger than they look. It also has a tough Armour Aluminium frame, so it’s a surprisingly durable handset for something that looks this fragile.

The Samsung Galaxy S22 Ultra is also IP68 certified, meaning that it’s both dust and water resistant. We’re not saying this is a rugged phone – far from it – but it should survive the bumps and drops of everyday life a little better than many premium handsets.

One potential issue though is its sheer size and weight. This isn’t a small phone, coming in at 163.3 x 77.9 x 8.9mm and 228g. But with such a big screen and so much tech packed away inside, this hefty build is inevitable.

For what you’re spending on the Samsung Galaxy S22 Ultra you’d expect it to be one of the most powerful phones on the planet – and it is – but it’s beaten not just by the iPhone 13 range, but also by some other Android phones.

That’s because it uses Samsung’s in-house Exynos 2200 chipset. This is top of the range and packs exciting features like ray tracing support, but despite that it’s not quite a match for the top Qualcomm chipset (the Snapdragon 8 Gen 1) found in some other high-end Android phones, and it falls some way short of the A15 Bionic in the iPhone 13.

In practice, you’re unlikely to notice the difference – the Samsung Galaxy S22 Ultra can still run every mobile app and game effortlessly, but it’s slightly disappointing, and may become more noticeable over time.

That chipset is paired with up to 12GB of RAM, which is plenty for a phone, though curiously less than you could get the Samsung Galaxy S21 Ultra with. 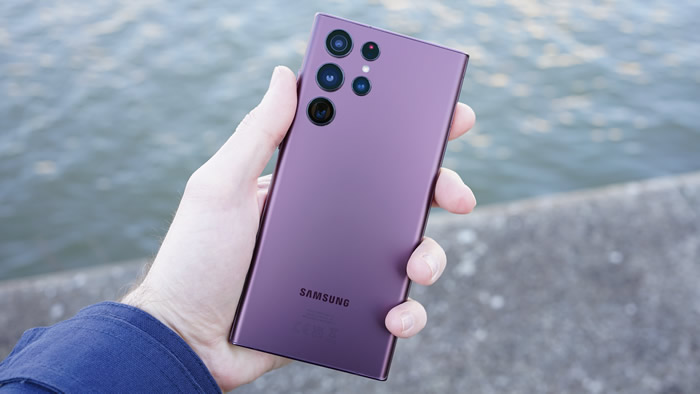 One thing that really doesn’t disappoint is the Samsung Galaxy S22 Ultra’s camera, and in particular its optical zoom capabilities. It has not one but two 10MP telephoto cameras – one offering 3x optical zoom, the other 10x, with the latter spec being something hardly any phones can match. For digital zoom meanwhile you can get up to 100x, and with higher quality than the previous model. 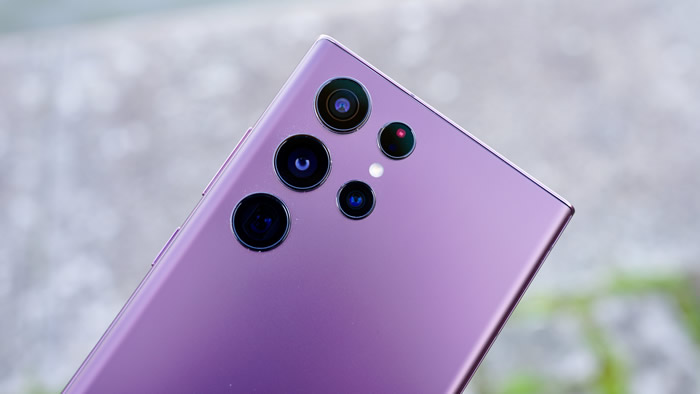 Every lens performs well, even in darker scenes, but it’s the zoom where this has all of the competition beat. For a more well-rounded and consistent photography experience, the iPhone 13 Pro and iPhone 13 Pro Max have the edge, while the Google Pixel 6 Pro performs better in bright sunlight.

Still, the S22 Ultra isn’t far off those phones, and its snapper is packed full of modes too, as well as including a decent video camera component. The 40MP selfie camera does an excellent job as well. 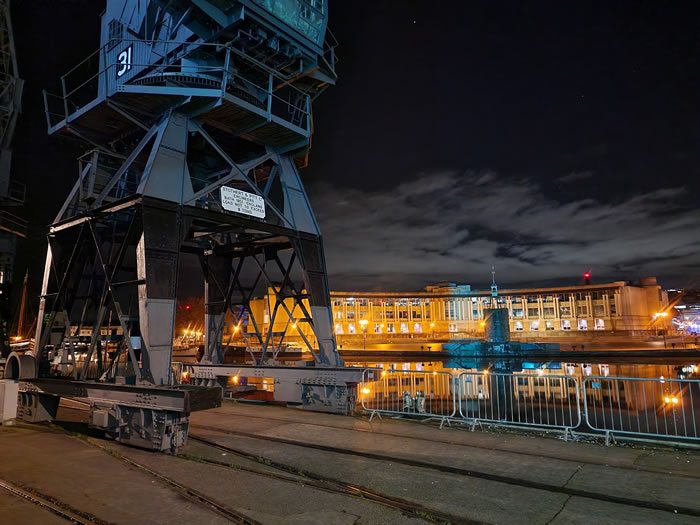 The main feature of the Samsung Galaxy S22 Ultra is its S Pen stylus. This comes with the phone and there’s a slot to house it, in contrast to the S21 Ultra, where the S Pen was available as an optional extra and didn’t have a dedicated slot.

This move makes the Samsung Galaxy S22 Ultra arguably the best phone there is for anyone who wants to do serious productivity or creation tasks on their phone. From sketching to photo editing and taking notes, the S Pen can make all the difference. On the other hand, if you’re not interested in the stylus then its presence could be an annoyance – adding weight and bulk to the handset.

Still, if you do buy this phone we’d suggest at least giving the S Pen a try as it really does perform remarkably well, coming surprisingly close to the feeling of using a pen on paper.

Other features that are worth a quick mention include the in-screen fingerprint scanner and the promise of four years of Android updates and five years of security patches – which is more than any other Android manufacturer promises at the time of writing.

There’s a 5,000mAh battery in the Samsung Galaxy S22 Ultra, which is about the biggest you’ll find in a phone other than ones where their battery is the main selling point.

Of course here there’s a whole lot to power, and even with a battery of this size you’re not likely to get much more than a day of life from the Samsung Galaxy S22 Ultra, and with the screen set at full resolution, a 120Hz refresh rate enabled, and heavy 5G use, you might not even manage a full day.

Still, it’s good that things can be switched off or reduced if you want to squeeze more life out of it, and the Galaxy S22 Ultra also offers 45W charging, which is a big upgrade on the 25W of the Galaxy S21 Ultra, so getting it juiced up again doesn’t take long. There’s also 15W wireless charging and 4.5W reverse wireless charging.

There are lots of options for storage, with the Samsung Galaxy S22 Ultra coming in 128GB, 256GB, 512GB and 1TB configurations. The last of those is exceedingly rare in phones, though also very expensive. Think carefully about how much you’ll need, as there’s no microSD card slot.

For connectivity there’s 5G of course, along with Bluetooth 5.2 and NFC.

The Samsung Galaxy S22 Ultra gets a whole lot right, from its premium yet durable build to its stunning screen, cracking camera, handy S Pen, long-term software support and masses of potential storage.

Yet its battery life is simply average, its performance while great is beaten by some slightly cheaper phones, its camera isn’t quite the best (except for when zooming), and it’s a bulky beast.

Add to that the high price, and this certainly isn’t a smartphone for everyone. But if you want a stylus or decent telephoto performance, nothing else can touch this, while for most other things it’s at least good – and in many cases great.